After dropping two games in some capacity this week, the Boston Bruins tried something different: winning. To be fair, they have won before this period of malaise and they will win again. However, this one was different because they had a special meeting to regroup before the game.

#NHLBruins coach Bruce Cassidy on tonight’s win over the Penguins: “We did have a different day today, we had a different meeting on some things we needed to do better as a group. It wasn’t necessarily a challenge, it was a reset.” pic.twitter.com/bovJDmVyUH

They needed to talk about it, a lot. With the recent firings of head coaches for Nashville and Vegas, it isn’t a huge leap to think that Bruce Cassidy was feeling some heat based upon the way the team has been playing as of late.

Last night before the game, the team feted Tuukka Rask for his recent 500th game with a pregame ceremony involving a video from former teammates and a special guest star, a silver goalie stick, a personalized bottle of wine, a customized Breitling watch, and possibly the thing he was most excited for: an exact duplicate of Lars Ulrich’s drum kit.

David Krejci was ruled out for this game with an upper body injury, one that also prevented him from participating in the morning skate. With Krejci out, Charlie Coyle was the next man up. Karson Kuhlman, fresh off his rehab stint with Providence, took over the third line right wing role previously occupied by Brett Ritchie, alongside Par Lindholm and Danton Heinen. Kuhlman played a role in two of the goals scored last night.

In just his second game back from his core muscle surgery, Sidney Crosby showed everyone that he’s back and ready to play. It took him only 24 seconds to take the lead.

Don’t worry, it all gets better. I mean, come on, you know they win in the end.

First, we had Sean Kuraly step up with one of those shots with purpose from the boards with assistance from Kuhlman and Charlie McAvoy.

Just a hair over two minutes later, Par Lindholm added to the Bruins scoresheet, with an assist from Kuhlman.

The game was super chippy with the usual villain, Patric Hornqvist, taking liberties with all sorts of Bruins players. But when he messed with Matt Grzelcyk, Torey Krug had had enough.

Torey Krug and Patric Hornqvist get into a kerfuffle. pic.twitter.com/mpWakTWrz5

Both would go to the box for roughing. They would soon take each other’s number again when they exited, just 6 seconds after they left. This time they both got five for fighting.

They weren’t the only dance partners. Chris Wagner seemed to be getting under everyone’s skin with most things not getting called except for his tussle with Kris Letang.

At the end of the period, the Bruins D kind of fell apart in the final minute. Thankfully Halak was on point, making a stupid amount of saves.

JAROSLAV HALAK WILL DO IT HIMSELF #NHLBruins pic.twitter.com/b6Tbam72Pg

Then in the third, the B’s decided they wanted to win. Having had a goal waved off after it bounced off his moving hand, Patrice Bergeron extended the lead with his 20th goal of the season.

David Pastrnak with the spinning, no-look pass to set up Patrice Bergeron’s 20th goal of the year. pic.twitter.com/UVVoKOvjMD

Finally, Brad Marchand took advantage of an empty net and the generosity of David Pastrnak to make it 4-1.

Whatever the team did for this game, I hope they do it again on Sunday afternoon.

#NHLBruins place David Backes on waivers for the purpose of assignment to @AHLBruins: https://t.co/CmbEM5W2KH

Does that mean some of his salary comes off our cap hit? Are they hoping someone claims him?

There will be some cap relief. I wonder if this means a trade is brewing.

That is the speculation.

I think cap recovery is like a million or something. In other words, not much.

Although this is interesting: most of his pay was in bonuses this year so his actual base salary is only $1 million. Sure, his cap hit is $6 million, but for a team that doesn’t want to spend money but could use the cap to hit a floor, he could be useful.

David Backes is a heart and soul guy who always competes, so this is tough to see— but he just doesn’t have it anymore and that contract is a handcuff. If Backes clears, the Bs can free up $1m in space. Between this move and Ritchie, I’d say a trade is in the works. #NHLBruins https://t.co/f0e8aphbB3

This guy knows a lot

Seems like they want Vladar to get some ice time in Providence tonight. They might do the switcher for Sunday.

Lagace? Did not expect that. Admittedly, I tend to forget about him, even though he’s played more P-Bruin games than Keyser and nearly as many as Vladar.

I just went over to the P-Bruins site – they didn’t have Lagace or Keyser listed (man, they update this stuff quickly), but they did have some ECHL call-up I’d never heard of (Martin Ouellette) there as Vladar’s #2, and I love this photo: 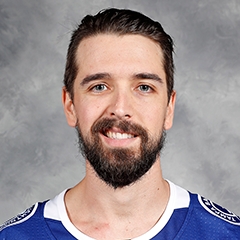 You just know his right hand is pointing at the cameraperson with his thumb pointing up like a mock pistol. “Hey, baby, how do you like these pearly whites?”

That is a cheesy smile.

Also, they just signed him the other day.

The #AHLBruins have signed goaltender ​Martin Ouellette to an AHL contract for the remainder of the 2019-20 season.

Well, Keyser is dealing with a concussion. The feeling is that Brough Vladar up because he deserved it. But, they also might really need the backup, so now Lagacé, who has some NHL experience, is up. Remember, he’s being paid really handsomely (like $225,000) in the AHL to essentially play and wait for a call-up.

A good win against a good team – the Pens are probably the 4th ranked team this morning.

But man, I lost my shit when the Bruins gave up a 2-on-0 rush with 20 seconds left in the 2nd. And then Halak makes the save and the Bruins skaters come to help him out, and he still has to make like 10 more saves.

After all they accomplished in that period to possibly throw it away and go into the 3rd without the lead would have been brutal.

Great to see Marchy put one in the net, even if it was an empty net goal. The dude has been so snakebit lately.

And it looks like no-goal is back on the roster!

Blackout game for me so had to settle for the highlights (and VA’s recap) but it looked like a good one.

Great to see Halak bounce back after a couple of dodgy efforts.

Kuhlman! That kid can play.

Kuhlman was looking good last night. He was fairly effective vs the Thunderbirds on Saturday, too. I hope he can sustain it.

A hilarious and awesome picture, at the same time. Congratulations to Tuukka pic.twitter.com/9WhPnVSwhp

It’s because he’s the Mayor and insists on being in every picture.

My favorite part of this picture is that Joakim Nordstrom knows what’s up and is losing it.

Helloooooo!!!
A thorough, convincing win against a hot team…. A team full of assholes! Hornqvist is the poster child, but the Pens are loaded with ’em.

Also, kudos to Krug! Ty Domi he isn’t, but definitely made a statement vs Hornqvist…

Teacher says, anytime someone punches Patric Hornqvist in the face, an angel gets his wings.

(I may be misquoting here)

Pretty sure you got that right!