I don’t know about you, but I could use a break from Bruins hockey. Not all Bruins hockey, just the bad version they’re serving up lately. Lucky me, tonight is the last game before the nine-day break. The Vegas Golden Knights are in town to play our Bruins at the Garden. In fact, they all had dinner at Monica’s Trattoria in the North End as were a few Bruins players and a certain Patriots receiver.

It happened to be Sean Kuraly’s 27th birthday yesterday.

Anyway, as for tonight’s game, David Krejci may be in or he may be out; Bruce Cassidy said they would determine that after this morning’s skate. Krejci skated before practice and joined the team for some drills while wearing his red no-contact jersey.

“Krech will try it tomorrow morning [at pregame skate],” said Bruins coach Bruce Cassidy. “Didn’t participate in the physical part of the practice. We definitely had a harder than normal day-before-a-game practice. Him not being able to do that makes it more likely he wouldn’t play.

“But he is gonna try it in the morning. No matter what, he’ll have nine days or whatever it is to recover. Or are we just better off giving him that? We’ll see how he is.”

Tuukka also skated some prior to practice. He will not play tonight.

Cassidy also gave an update on the condition of defenseman Kevan Miller. As you may recall, he twice broke his right patella (once in each direction) and while it looked like he was on the mend and skating on his own, he suffered another setback some weeks back, requiring another procedure. Miller skated by himself on Sunday for 15 minutes. Cassidy described it as “step one”.

Hopefully after yesterday’s bag skate, the B’s will return to their winning ways just in time to go on vacation or the NHL ASG, whichever one applies.

Lauzon in for Moore

I guess I could plug this here. This week we have Satan81’sSister’sBrother, aka Satan81 or the Jamin part of Glennjamin. He even inspired this week’s title.

Hello hockey friends. What will we talk about over the coming days? I mean, I’m so tired of talking about all the ways the B’s are screwing things up.

We can talk about how Data and Troi are now on my shit list:

“Captain Gritty” of the USS Enterprise?@SirPatStew, @BrentSpiner, @JeriLRyan, @Marina_Sirtis and the cast of @StarTrekCBS tell us if @GrittyNHL could make it in #StarTrekPicard’s Star Fleet, which #StarTrek character would make the best hockey player and more. pic.twitter.com/1mcrv3hoxc

Yes, perfect. We can talk about this. They did Gritty dirty. I hope he exacts his revenge.

I told SatanDad that Grittyson was going to become like the Talky Tina doll and terrorize him for not letting him go to birthday dinner.

Also, I had something else I was going to say about the Star Trek NHL Tweet but I forget what it was so let’s pretend I just said something witty about it and all laugh.

He shouldn’t treat his grandGritty so terribly. SMH.

But taking the Cup to Kronos and rubbing it in the face of the Klingons?
I’m all over that.

Keep in mind – I own a Marchand jersey (kisses ring finger)

Worf and Chara would make a helluva D pair.

I could use a win out of the Bruins tonight. Just when I think they’ve got their act together, they disappoint me. I don’t like lacking confidence in the team when they’ve been bouncing around the top 3 spots in the league all season.

Morning all. I certainly need a break from the Bruins. I’m ready to smack them all upside the head.

If you do that to Kuraly, he might have to wear the fishbowl again. Better yet, punch him in the nose, then we’ll definitely get the bubble. 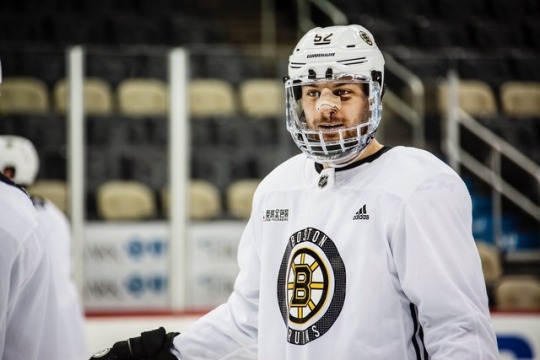 There we go! We’ve solved this season’s woes! Get the Duck Boats ready!

While it wouldn’t be the end of the world if they don’t win tonight, it would be great for them to go into the break on a positive.

Great teams have their opponent half beat before the puck drops. Right now Bruins opponents are thinking they can win even if they’re a couple goals down going into the third. They need to rebuild that aura.

Little Bear has been told by her teacher to try reading some more ‘grown up’ books, so she’s tackling the 1001 Arabian Nights. She was a bit confused by a passage about a farmer who ‘possessed a magnificent ass’.
Glad she asked me insted of googling it!

Hahahaha! And sounds like you have a smart Little Bear!

Ohhh, I vaguely remember that passage
– the boys of the court and the many wives of the Sultan would prattle endlessly upon the beauty of the farmer’s magnificent ass –

Prattle is such a great word.

But did his milkshake bring all the goats to his yard?

Hey All!
Could the boys go in to the break with a win, please?? They need the break…. maybe they’ll be reenergized following their rest.
Nine days to spend getting my shi t together!!!