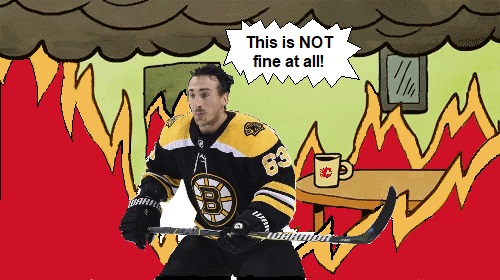 The Bruins are still on their road trip, out in western Canada, battling the Flames.
https://giphy.com/gifs/3MdXwFXg9GLqyaI7md/html5

The Bruins are now at 38-11-12, putting them 1st in the Atlantic, and 1st in the league, a mere 3 point ahead of the Tampa. And also 8 points ahead of Pittsburgh and the Caps.

Last time, on Bruins hockey…
The Bruins went to Edmonton, to face the Oilers. They would start off strong, controlling possession, in spite of having their lunch stolen on the faceoff dot, and go up by 1 goal in the 1st period, then the Oilers would answer in the 2nd period, evening out the shots, but it would take until the 3rd period to tie up the game.
However, they had the better 3-on-3 game, with David Pastrnak popping in the winning goal on a David Krecji stretch pass.
Bruins win, 2-1.

Karson Kuhlman is back. Danton Heinen is back. Nordstrom is back. Brandon Carlo is back, Jeremy Lauzon is back and has been extended 2 years. Blidh is still with the team.
Brett Ritchie is still in Providence.

David Backes is out of trade limbo and into Anaheim – he’s been traded to the Ducks along with Axel Andersson and the 2020 first-round pick. In return, they get Ondrej Kase who has a year left on his contract, and has been scoring at a rate higher than Danton Heinen. Kase has had some injury issues and is currently battling a flu. He is not expected to join the team until Monday, when they return to Boston. No doubt many B’s fans are looking for more from the trade deadline.

Injured defensemen Kevan Miller (fractured kneecap) “has no timeline” for his season debut, but has been skating on his own. Connor Clifton has been skating and has been sent to Providence, surely a sign that he is almost ready to return.

Heinen was practicing with the Krejci line, bumping Kuhlman to the Coyle line. Blidh has alternated with Nordy on the 4th line. I’m hearing that Blidh will skate tonight.

Jaro Halak will be between the pipes today.

The Calgary Flames are the opponents of the evening. They are tied for 4th in NHL Pacific Division with a record of 31-24-6 (68 points). They are 4-2-0 in their last six tilts.
Elias Lindholm and Matthew Tkachuk are the most prolific scorers, with 27 & 20 goals, and Johnny Gaudreau is a playmaking machine. They score a lot and let a lot of goals in their own net.
Mark Giordano (Hamstring) and Travis Hamonic (Illness) are on IR.
Juuso Valimaki has been put on long-term injured reserve with a torn ACL.
Derek Ryan (illness) is a game-time decision.
(h/t Daily Faceoff and Calgary broadcast guy Derek Wills):

Some punchyface, there.
Tkachuk was making a pretty strong go of it before Lauzon started getting his licks in.

Good stuff! Looked like Lauzon put a lil hurt on him with that check near the end of the period.

Wow! Lauzon can throw down!!!

I don’t think Bruce will mind.

Wouldn’t it be weird if Pasta was the icing on the cake??

That would have been the icing on the cake!!

So Kase for Backes, Axelsson, and a 2020 first round pick.

I’m happy. No one off the active roster, B

Backes gets another shot. Haven’t heard about the money.

Can we maybe *try* to prevent them from shooting off the rush?

That hit by Grizz was the result of a “buddy pass”. Beautiful hit!!! Calgary dman should be in the box.

And for once i agree with Jack…. Horrible call.