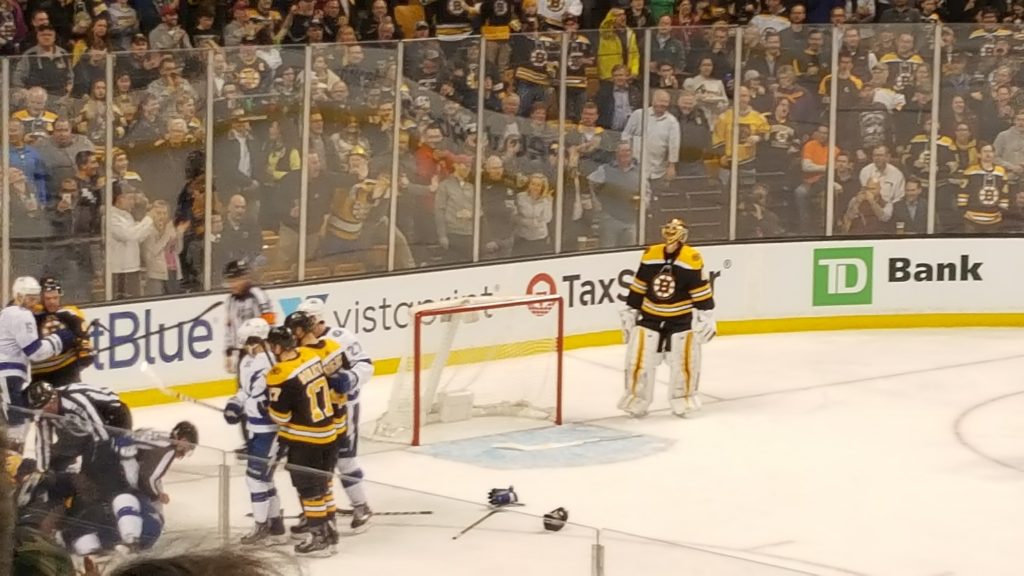 The Bruins were in Sunrise Florida, trying to ruin the Panther’s evening.
MacKenzie Weegar (possibly an actual name) put Florida on the board first, early in the 2nd period.
Later in the period, Florida forward Evgenii Dadonov would elbow Brandon Carlo in the face, knocking Carlo out of the game. For some reason, the original call on the ice of a major penalty was reduced to a 2-minute minor on review. It would take only 14 seconds into the power play for Patrice Bergeron to even the score.
The 3rd period was uneventful on the score sheet, but was a bit of a comedy of errors on the penalty logs, including most notably, Frank Vatrano playing the puck before getting his back skate out of the penalty box, which is, as he now knows, also a penalty.
The game would be tied at the end of regulation.
Torey Krug would break the tie, at 4:08, sealing the game in favor of the Bruins.
The Bruins managed to beat a middling team with a middling effort. Two A’s, no U’s, 2 points.

What will be the lines today?
Bruce has continued to kick around some new lines

Anton Blidh is still on the NHL roster, and Brett Ritchie & Steven Kampfer are still in Providence.
Karson Kuhlman has just been sent down.

Ondřej Kaše and Nick Ritchie have been on a Ritchie-Krejci-Kaše line since both appeared on the game rosters, and will be on that line today.

Brandon Carlo is the newest injury, and will not play tonight. John Moore will play in his stead, paired with Torey Krug. Connor Clifton has just been activated from IR. There is still no timeline for Kevan Miller’s return (fractured kneecap).

Today’s opponents are the Tampa Bay Lightning. The last time the Bruins saw them was on Tuesday, where the Bruins got out to a 2 goal lead and the Lightning were only able to score 1 and to have a near score called off on an offside. Including that loss, the Lightning are 2-4-0 in their last 6 games. They are 2nd in the division, 2nd in the conference, and 3rd in the league.

Their injuries are unchanged since Tuesday – Ryan McDonagh has been dealing with a lower body injury since blocking a shot in early February. Jan Rutta is also working through an intermediate-term lower body injury. Most recently, Steven Stamkos suffered a core injury. He underwent a surgical procedure and will miss at least 6-8 weeks.
(h/t Daily Faceoff and the Athletic’s @JoeSmithTB)

Welp, that’s a great hockey game. It’s going to be something else if these two teams meet again this year!!

What in the ever loving fuck is going on???? Just what is the phase of the moon?? Anyone??

Did Cirelli take the faceoff AND take a 10 minute misconduct?

Ah, Cernak not Cirelli got the misconduct.

PUTTIN ON THE FOIL!