Even though the Bruins lost the game on Saturday night to the Tampa Bay Lightning 5-3, and the season series to them 3-1, not all was lost during that game. On one level, the game was very frightening as we as fans had to deal with a defensive second pair featuring John Moore instead of the injured Brandon Carlo and a Tuukka Rask who was having a poor game for the most part. On another level, the game was highly entertaining.

All game long, the teams took opportunities to express just how much they hate each other on the ice. Barclay Goodrow elbowed Ondrej Kase.

Illegal check to the head of Ondrej Kase by Barclay Goodrow, given two minutes for “elbowing” pic.twitter.com/GNuuqpAzef

It wasn’t exactly and elbow but there may have been some contact there. Anyway, Goodrow goes to the box and the Bruins, on the power play, allowed two goals against in 1:02 of game time. Not good, Bruins.

After Goodrow served his time, Chris Wagner wanted to exchange pleasantries with him. Both went to the box for Unsportsmanlike Conduct. Six seconds after they both left the penalty box, the two engage in fisticuffs. Both go for five.

In the second period, before the Bruins could even get on the board, Tampa scored again. Nearly 3/4 of the period went by without a penalty on either side until Anthony Cirelli cross-checked Zdeno Chara from behind, prompting Brad Marchand to stick up for his fallen captain. Both Cirelli and Marchy went for matching roughings. Then Charlie McAvoy nets the first Bruins goal on the 4-on-4.

Charlie McAvoy is on fire. TD Garden is buzzing. Game on #NHLBruins pic.twitter.com/HnsCyA9trn

A few minutes later, everything goes bananapants. At 18:37 of the second period, Sean Kuraly scores a goal in the dirty area to bring the Bruins within 1. Then, all hell break loose, resulting in many fights, wrestling matches, a couple of misconducts (one to the TBL coaching staff), and a bench minor.

We have complete chaos at TD Garden. pic.twitter.com/BVsbGOOE2q 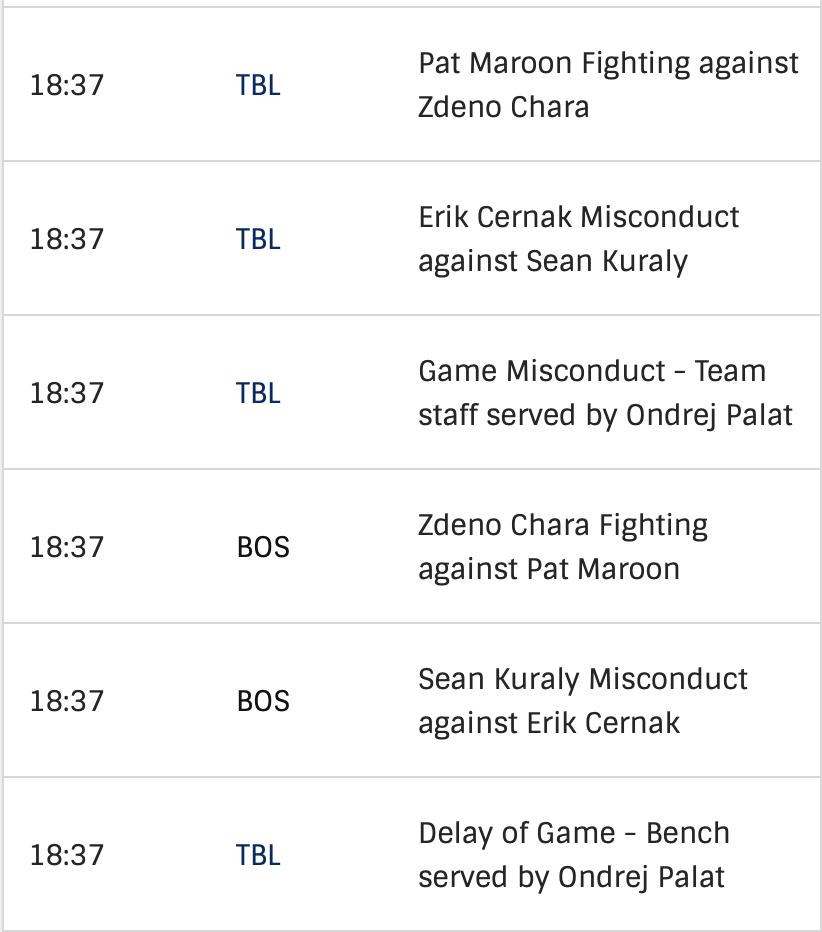 And at the end of the second period, another melee breaks out when 4 Lightnings clobber Brad Marchand in the corner after he slashed Blake Coleman. Marchy’s penalty at the 20 minute mark would come back to both him in the ass.

Yep, Alex Killorn scorned on the power play, putting the game further out of reach for the Bruins. Not even David Pastrnak’s league-leading 48th goal could gain back the lead. The Lightning added an empty netter to seal the deal.

Per #NHLBruins coach Bruce Cassidy, both Brandon Carlo and Torey Krug are out for Tuesday’s game in Philly with upper body injuries.

Carlo skated on his own this morning – will target Friday in Buffalo.

Connor Clifton will go in and play alongside John Moore.

The Flyers are on a tear as well! Ah well, we’ve got a big enough cushion for now…

Torey Krug and Brandon Carlo are not practicing.

I choose to look at this game as a fun Saturday night rather than a loss to the only team that could actually be better than the Bruins.

I also think that game is a lot different with Brandon Carlo in it.

I’m not enthused by the Bruins’ prospects of getting through a 7 game series with the Lightning this postseason. It’s liable to be an exciting series, but Tuesday’s game was kinda decided by a marginal offside challenge, and the Bruins lost the other 3 matchups.

I’ve got a few minor angrys over the game but mostly I do enjoy the occasional line brawl. And then seeing six guys in the sin bin.

The 4-on-1 on Marchand is really something that should have received more aggressive punishment (from either the on-ice officials or the other Bruins players). That’s not the sort of thing that can be allowed to repeat itself.
It also — yet again — shows the uselessness of the 3rd-man-in instigator rule if something like that wasn’t penalized. Yeah, it wasn’t Eddie-Shore-clotheslines-a-guy-with-his-stick level of bad, but having multiple guys gang up on another is one of the cases that we were sold on when the instigator rule was created.
And while I’m at it, WTF with Cirelli getting away with crosschecking Chara while he was engaged with Maroon(?) ? That is both a penalty in and of itself and a 3rd-man-in instigator.
Does the league have a different goal in mind with this rule than I’ve assumed or is it a matter of having regrets for making it’s consequences so severe and being afraid to actually call it?

And what was even worse about the four-on-one attack is that Marchand ended up getting the penalty for that.

Morning all. Well that was a game that happened.

So the Bs lost, but it was a hell of a match. Sets up nicely for when they meet in the playoffs (it’s gotta happen, surely?).

I don’t know what it is but something about line brawls just tickles my funny bone. I was in tears laughing at one point during that game. Maybe it reminds me of the Royal Rumble, which was always my favourite WWF event. I’m just weird I guess!

Oh it was absolutely hilarious.