Last week the Boston Bruins signed a couple of players, both prospects who have put their college days behind them. While they will see no further playing time this season due to the Providence Bruins folding up their season, they’ll be more than ready for development camp and beyond, whenever that happens.

On St. Patrick’s Day, Maine Black Bear great (according to Tim), goalie Jeremy Swayman signed an ELC for 3 years at $925,000 at the NHL level starting in the 2020-2021 season. Swayman was drafted in 2017 in the 4th round and has played the last 3 seasons with the University of Maine after a brief stint in the USHL. In 34 games this season for the Black Bears, he has a .939 save percentage and a GAA of 2.07. In his final season with Maine, he is a Hobey Baker finalist.

Today, @JeremySwayman inked a deal with the Boston Bruins!

Jeremy's dad and our coaching staff watched as he made it official – congrats Sway!!#BlackBearNation | #HockeyEast pic.twitter.com/vpoGLa9OmH

Also on St. Paddy’s Day, the Bruins signed Nick Wolff, an absolute monster of a defenseman at 6’5″ ,225 a free agent who played for the same college program as Karson Kuhlman, University of Minnesota-Duluth. The 24 year old left-shooter is signed through next season. He’s been a development camp invitee the past couple of seasons due, in part,  to his connection with Kuhlman. While the prospect pool is deep with left shots, the thing that sets Wolff apart is his size and that he seems like another Kevan Miller type.

Nick Wolff, 6’5” and 230lbs, is a left-shot defender with range, mobility, physicality and shut down elements. Wolff turns 24 in July, but he’s a legitimate prospect with NHL potential. Wolff will likely be in Providence next season and there’s a lot to like here. #NHLBruins https://t.co/MVj7UDGpKS

Yes, Bruins dogs will be a highlight hopefully for days to come.

So, what better time than now to launch #NHLBruins Pawsitivity with @CharlieCoyle_3 and Bodie!

I AM HERE FOR YOU, BRUINS DOGS!

And Chris Wagner represents the awkwardness of us all right now.

"We've got to stay together. Stay inside. Do your part. Do what you can to stay healthy and keep those around you healthy."@TDBank_US | #StayingConnected pic.twitter.com/QzrBV0fSIz

One last thing, what does this mean?

What does this mean? Is Carlo and his GF going back to Colorado? pic.twitter.com/Iypne3cN8R

Oh, I almost forgot – my job here is to provide a daily Richard E Grant fact.

Richard E Grant played a Dr. Who villain, called “The Great Intelligence” in the Matt Smith version of the rebooted series (2012-2013). 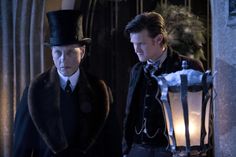 As host to the Great Intelligence, he was in constant conflict with the Doctor’s companion, Clara.
Clara is also the name of the person Grant’s character in Dispatches from Elsewhere* is obsessed with.

“The Great Intelligence” was a villain who was only seen in two loosely-connected Dr Who stories from the 1960’s Troughton-era.

Grant also actually played The Doctor as a voice actor in a pair of not-quite-canon stories that were recorded during the long hiatus between the 7th Doctor and the post-2000 reboot.

*A current weekly series on AMC

Wow, this is an impressive daily Richard E Grant fact.

I was not expecting such a detailed Richard E. Gran fact. We might have to give IW a raise here.

I feel like I was wrestling last night. So very tired.

(Actually, I should have expected this because I put the shovel away in the closet. I jinxed it.)

Thankfully it’s gorgeous here! Spent a lot of yesterday outside with a book.

Nice! And enjoy your one exercise per day!

Anthony said he was supposed to get 6-10″ of the white stuff yesterday. We got like 2 before the rain. Now it’s just sloppy looking out there. I knew March had a catch.

Wolff sounds exciting! 6-5, 230lbs with mobility? Yes please! But is he a ballerina?

For those keeping track of my series, London Bear learns about random sports, we have so far had:

And today’s feature: Short Hockey (You don’t have to watch all eight hours of that video!)

I’m actually glad I found this video because I can’t find anything about the rules so I’ve had to glean them from watching it!

I think it looks quite fun -I fancy giving it a go! And, Stripes, it looks like a perfect games for officiating if you’ve had to give up the full-size version!

I think I’ve seen clips of the Bruins doing short hockey sometimes in practice to have a bit of fun.

With everyone home and On the net, video is running slow. I’ll have to check it out later. Can I ref from a chair??

Can I ref from a chair??

You probably could! Although it seems one of the ref’s tasks is to draw the centre line before the match!

A ballerina? Aren’t we demanding!

I am curious about Australian Rules Football, but have never really taken the time to understand it.

Seems to be very similar to Gaelic football, if that helps any! All the research I did made it seem pretty interesting, although the match times weren’t very friendly to a UK viewer.

The season was called off after the first round of games, anyway!

Oh, right, of course the season was cancelled. This has gotta be kind of frustrating for you.
Every now then one of the sports channels will show Aussie football – I think it’s NBC sportsnet. I’ll watch a little bit, then move on.

NBCSN carries a few of the less popular sports, and when I think about it, the economics of carrying minor sports are not very lucrative. They push Premiere League really hard, hoping to build an audience, and I can kind of see why, though we do have a national MLS league which would be less strange to see, and it could also use the audience.
They used to have a lot of Golf, but when they merged with Comcast – who owns The Golf Channel, obviously most of the golf consolidated there.

It’s kind of funny – when I open the site up in the morning, I use my laptop, which doesn’t render tweets & pictures on the browser I use, so it’s all html code.

Hellooooo!!!
Getting a little stir crazy. Tomorrow I go north. No carpenter (safety first!), but I need to get away!!! Finding out why I don’t watch TV. It sucks!
Going to get some surfing in today. I can park near the wave in South Kent. No sharing rides to go up and downriver.
Jo filled the larder yesterday, so no need to go to the store. Fuck the mail. Oh, we have a PO box as we live in the historic district. Let it stay in the post office.
Yeah, I need to get outside!!!

There’s only so much air in this place. Jo and I have to take turns breathing!!

Weird.
Doesn’t mail delivery predate the town? I mean it’s named after a President, after all.

My parents had a P.O. box when I was in middle school because our town had like 1 delivery driver, and he couldn’t be bothered to drive 300 yards out of his way to support a single mailbox. As great as the Postal Service is, they can be more than a little prissy.
My mail this morning was drenched because the delivery person couldn’t close the door on the mailbox. It’s not even a tight fit – it has a magnet closure – one just needs to get the door near the closed position for it to stay put. I can only assume she has little tyrannosaurus arms and couldn’t reach.

Hey, your town has a Wikipedia entry!
This line amuses me to no end:

Much of the central and southern part of town is covered by Monroe State Forest, which extends into neighboring Florida.

I mean, I understand enough of the local geography to “get it”, but the thought of a New England town bordering on Florida gives me a chuckle.