The other day, The London Bear asked a question about player compensation during the Stanley Cup Playoffs. The short answer is, yes players do receive a bonus that is dependent on where their exit in the playoffs. However the longer answer requires a closer examination.

In Article 28 of the current CBA drafted in 2013, the playoff “player fund” is a predetermined amount of money. 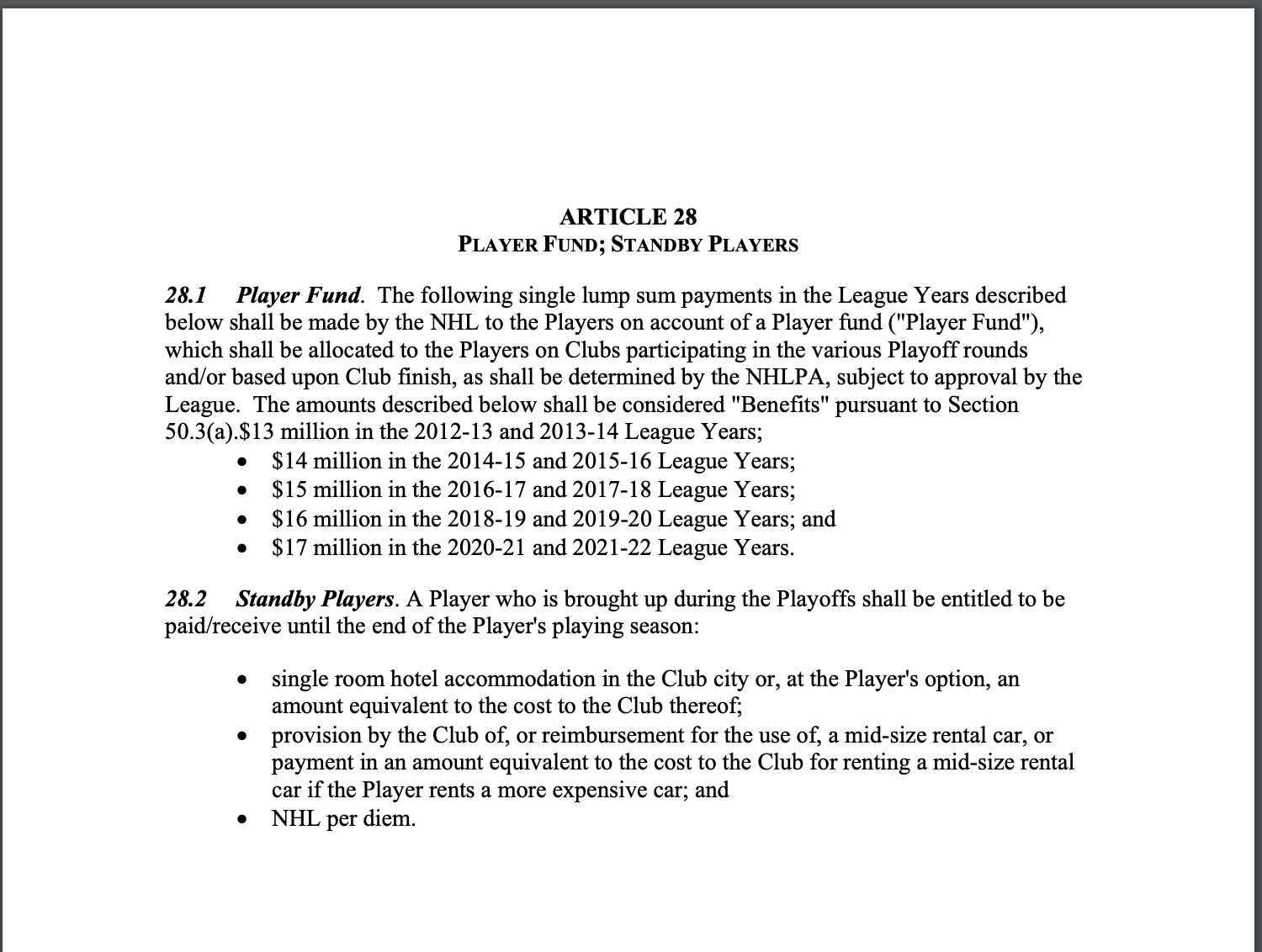 That fund is partly set up by teams handing over 35% of their gate receipts of the previous season’s Stanley Cup Playoffs.

The CBA has a surprising amount of pages devoted to accounting. Maybe it shouldn’t be surprising to most people as it is a binding contract, but for those of us who would much rather read a book on the concept of zero rather than anything regarding accounting practices, it is a huge amount of lawyer talk with the adding and subtracting money.

Anyway, this season’s prize pot is $17 million dollars. How does that get divvied up? That’s an excellent question.

According to some numbers out on the internet, last year’s bonus pool of $16 million was divided up in the following way:

That only accounts for most of the money, presumably there is a bonus for being named winner of the Conn Smythe. This year, the numbers would be slightly different.

So, that’s the bonus structure to teams. Each team has the right to distribute the bonuses as they see fit but it seems that typically they get divided up pretty evenly.

Painting Day 5: We are beginning to see the light at the end of the tunnel. One more coat on the large accent wall and we;ll be done with the large painting with only touchups from there. I look forward to having my living room back in some form. I kind of don’t miss the TV though. It’s very quiet (and echoey(is this a word?)) Mostly I ready to begin the spring clean.

Boomer is coming home on Sunday.

Morning all. With Stay at Home happening it’s been fun to see the wildlife reemerge. I’ve seen Punxsutawney Phil run across the yard a few times. And yesterday a family of pheasant looking things were wandering about the yard. Looked like little velociraptors from far away. Had the Jurassic Park theme stuck in my head.

Definitely the critters have become bolder since lockdown. Just goes to show it wouldn’t take them long to reclaim the land if humans disappeared!

We’ve got some kind of bird that likes to hang out under our deck – haven’t gotten a good look because they’re so skittish.

There’s turkeys hanging around just out of sight – I think one of our abutting neighbor’s trees holds a roost. We heard the cardinals chattering last night:
“*chip* *chip* *St Francis argued that embracing nature was a veneration of God and therefore a core Catholic value* *chip* *chip*”
Every now & then we hear the neighborhood owl.

Deer activity has been a slight thing. There’s a also a constant rustling of squirrels & chipmunks.

When I first saw the pheasant/little velocirpators their heads were down and I was positive it was a herd of aardvarks.

Good name for a hockey team!

Could be a Phoebe under your porch. If it sits on a branch and Bob’s it’s tail, probably Phoebe. Their call is a raspy two syllable something like “fee bee”…I think it sounds more like “read it”

We did have a Phoebe nesting there a couple of years ago. Something happened and she left the nest.

Wow, that’s a fantastic explanation of how it all works. Answered all of my questions, thank you for that.

Scorching hot today (by my standards). I will be lighting the bbq later!

I’ve resisted the temptation of the spirits aisle on the weekly shop the last few weeks, but today the lady who I also shop for gave me a bottle Buffalo Trace bourbon when I dropped off her stuff. I’ll interpret that as the universe telling me it’s OK to indulge this time!

and no such thing as cold

Clearly that person has never experienced a Vermont winter!

Thank You Booze is definitely the universe’s way of saying have a drop!

Buffalo Trace is quite tasty – I was skeptical until I had a bottle.

It is a good book. I read it one summer while I was in college and not taking summer classes. The idea of zero is very much a philosophical one with the reality being that it is a much needed number. Thanks to the Arabic world for saving mathematics and developing numerals as we know them, even zero.

Also, I might point out that Newtons Laws of Thermodynamics explain all of this as well.

I know the Second Law – mainly because it’s quoted in a Muse song! Something about dissipation of energy in an isolated system. Fascinating stuff, but I have to give it all my concentration.

Update on Mac….. Jo’s mom seems to have beaten the Covid, but she is depressed, will not eat (hasn’t had a bite in weeks), and probably won’t last long. Hospice is putting her on morphine. Jo is sad, of course, but has done everything possible.

Oh that is sad to hear. Had been meaning to ask how Mac was. Best wishes to all.

I’m so sorry. Hopefully Mac is as comfortable as possible. Keeping you and Jo in my thoughts.

Oh man, I’m so sorry. I was hoping that since we hadn’t heard anything that she was pulling through and she did. But even fighters need their rest.

Good Morning!
Wow! Thanks for all that info, GH! It’s still hard to imagine what this year’s playoffs will look like, depends on the playoff structure, number of rounds, etc.
Back in Connecticut this morn. Got to get out and work!!

And now, I need to read Zero: The Biography of a Dangerous Idea

It’s good. I might actually have a copy of it somewhere. Edit: I do and I just found it on my “Science: Nonfiction” shelf. My copy is 20 years old!

I also learned about The Golden Ratio (the number, not the group of Golden Retrievers) in this book.