Yesterday, the Bruins Twitter account announced the winners of several of the Bruins season awards: The Eddie Shore Award, The Elizabeth Dufresne Award, the John P. Bucyk Award, and the Three Stars. As of now the Seventh Player Award has not been announced.

Was it a surprise that Brandon Carlo won the Eddie Shore Award for “exceptional hustle and determination”? Not really. Carlo, energized by his first playoff campaign, turned a corner in the 24 postseason games and continued to build upon that for the 2019-2020 season.

From Matt Porter of the The Boston Globe:

Carlo blossomed into one of the league’s better shutdown defensemen in his fourth season. Among the 99 defensemen who played more than 1,000 minutes at five-on-five, Carlo was on the ice for the fewest goals against (32). He tied partner Torey Krug for third on the team in ice time (20:29 per game) and chipped in a career-high 4-15—19 scoring line.

My Boyest of Boys took to Instagram to express his gratitude for the recognition. 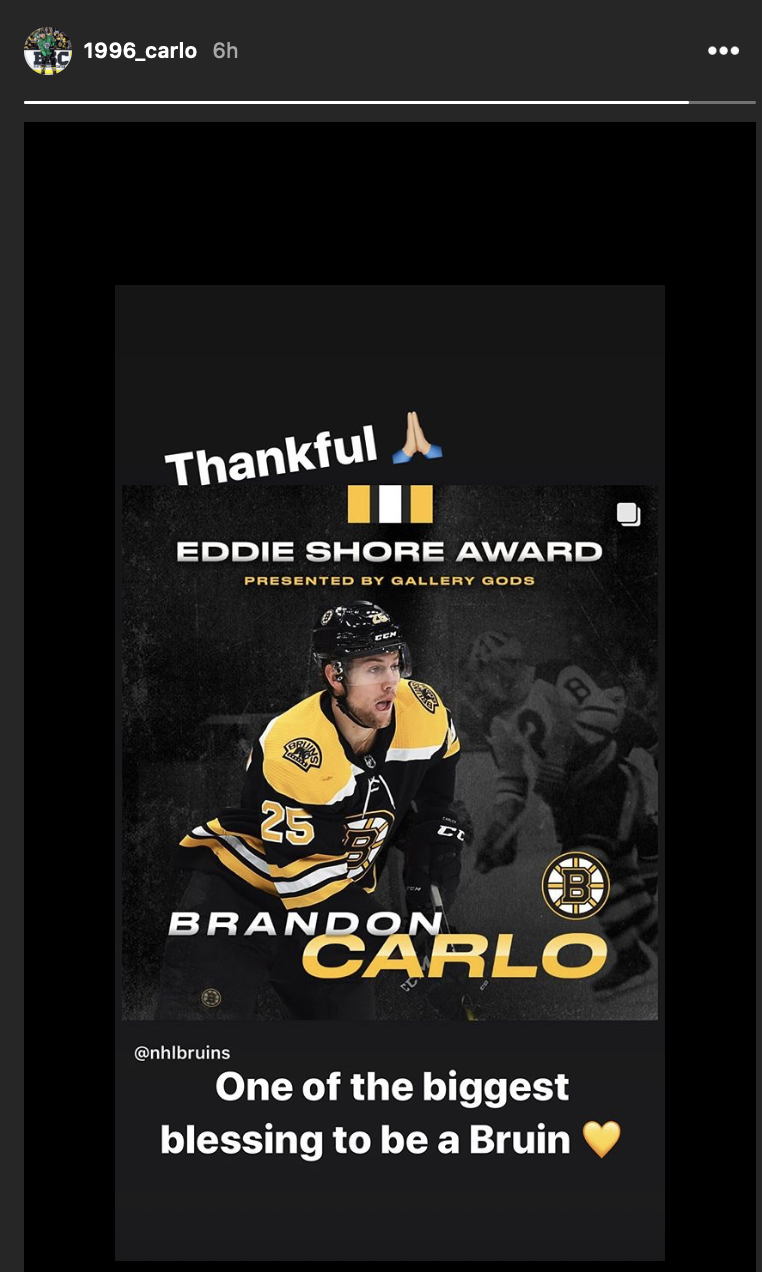 The Elizabeth Dufresne Award is given to the player who was the most outstanding player during home games. Shocker, it was David Pastrnak! Pasta scored 28 of his league-leading 48 goals and 49 of his 95 points at home.

St. Patrice is the winner of the John P. Bucyk Award for greatest off-ice charitable contributions. Among the many contributions Patrice has made: Patrice’s Pals (the suite that he rents and visits for sick children and their families), The Pucks and Paddles fundraiser, and the sizable contributions he’s made to the Boston chapter of the NAACP and it’s sister organization in Quebec, Centre Multiethnique de Quebec.

Your Three Stars of the Season as determined by 98.5 The SportsHub:

Remind me again why we are so insistent on having playoffs?

It’s my understanding one NHL club has had to temporarily close its training facilities during Phase Two because multiple players and some staff have tested positive for Covid-19.

Can’t argue with any of those awards. Well deserved all.

Morning all. Our parent company is now observing Juneteenth. I plan to take some time today to watch the Willie O’Ree documentary and give stick taps to him.

Nice!
I was planning on going to a Juneteenth event in a neighboring town.
It takes place an hour ago.

Oops. Thought it was a 4 or 5 PM. I was busy with a work thing anyway.

I love the shot of B rad blowing kisses at the All Star game…. I think that’s the one where Wes McCauley says “How about if i called a penalty on you?” ” you’d be a God here” was Marchand’s snappy repartee.
Lots to do today, including welding a new exhaust on Jo’s car. Nice day for it, eh?

Yesterday was such a disaster for me wrt work. I want to play hooky, but I can’t quite justify it.