I admit, I’ve been saving this one, not because it’s especially fun, but because it involves so many of my least favorite things: contract talk, legalese, and worst of all: boring words problems. Because that’s what all of this is and that’s looking at it in sunny terms. At the very worst, this is how the NHL screws their players. For the most part, the stars and those with big contracts are shielded from the worst of it. You’ll see how this works out later.

First of all, when it comes to CBA talk, perhaps the most important part of it is the profit sharing deal between the league and the players. In a previous CBA, the profit sharing was split 57-43, in favor of the players. Today’s CBA, like the one before it, cites a 50-50 sharing plan. In order to make this work, players have to make a grand concession right off the bat.

Escrow, or How Players Get Screwed, Part I:

Any discussion of the NHL escrow rules requires a brief description of the salary cap and how it is derived. The NHL salary cap is determined by the previous season’s hockey related revenue (HRR) from direct and indirect payments: tickets, concessions, licensing and merchandise, broadcast deals, sponsorships, and arena parking. This is only part of the league’s revenue. Other money that isn’t counted in the HRR can come from: interest; a relocation, sale, or entry fee for a new franchise; and loans.

The HRR number is divided evenly between the teams to arrive at a number from which the salary cap is determined. So, for instance if the total HHR for a year is $4.4 billion, divided by 31 the final number per team to determine revenue sharing is $141.6 million. Then, the league does some funny math with this number; instead of dividing it in 2 and saying that’s the salary cap, they divide that number in half ($70.8 M) then add 15% to determine the salary cap ($81.5 M) and subtract 15% to determine the salary floor ($60.2 M). Since it’s based upon the previous season’s revenues, it is often estimated at some point during the season as to what the projected cap will be based upon the numbers the league has at that time. During the 2018-2019 season, the estimate was that the cap would rise as high as $83 million. However, by the time final accounting had been performed, the cap was set at $81.5 million, up from $79.5 million the season prior. In fact the cap has risen each year since 2013-2014 when the cap was $64.3 million. And it’s good too, because players contracts and salaries are getting larger with each year.

Now, players make the amount of money that is their salary cap number, right? Wrong. A player’s cap is an average of their salary over the length of the deal or the annual average value (AAV) of the deal.

Take a look at Charlie Coyle’s deal thanks to CapFriendly: 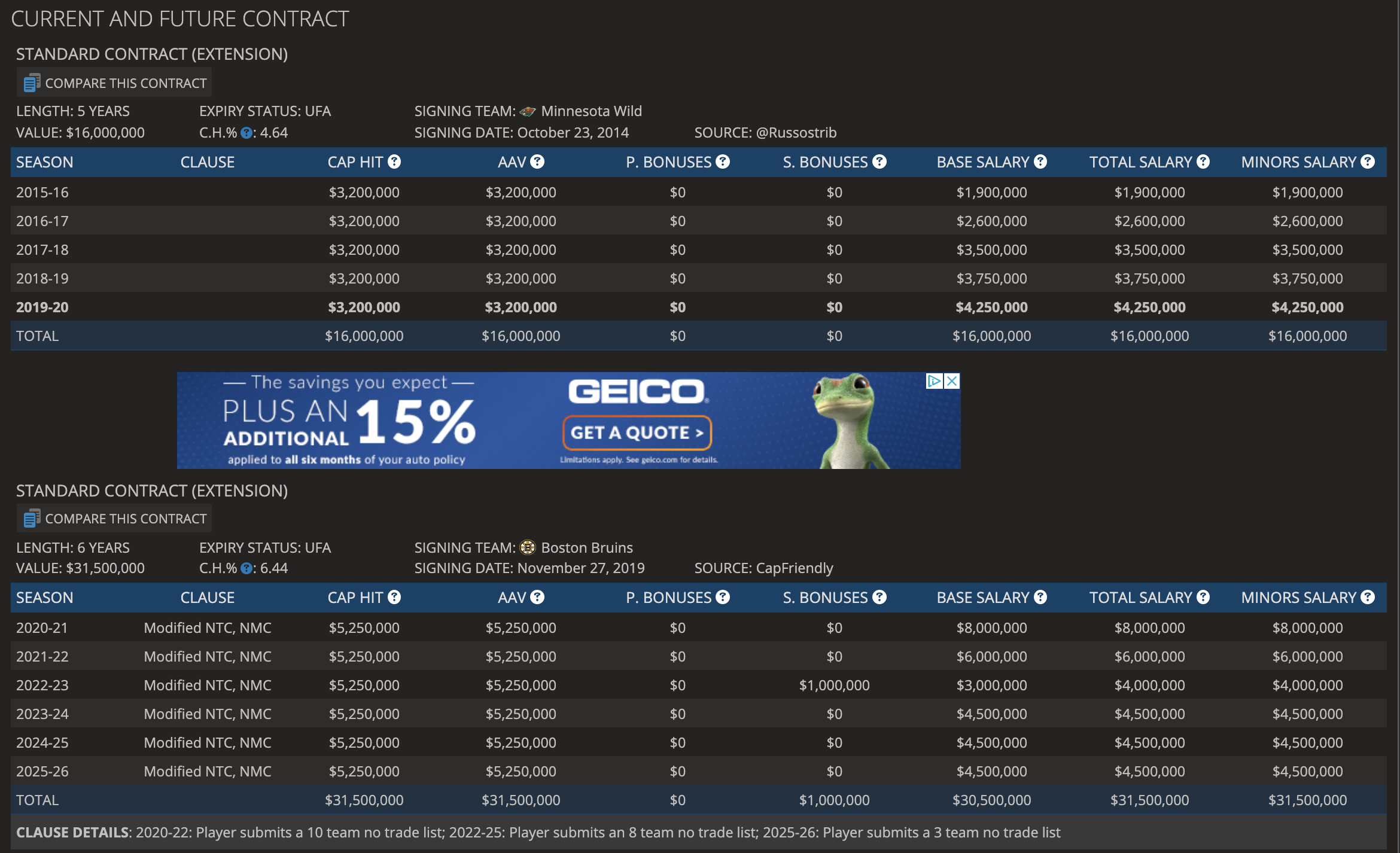 In fact, most players have no idea what kind of money they’ll actually make until the season is over. Sure, players that make the playoffs can see some additional money from the Stanley Cup Playoff bonus pool but it is nothing like their actual game salaries. But, the more important factor for NHL players is the amount of their salary that they have to set aside for escrow.

Each season, the players have to set aside a percentage of their annual salary aside in escrow. The NHL combines this money in a joint account for the purposes of determining the even split of profit sharing based upon the season. Usually, the players have around 10% taken out and collected into the joint pool; however, the escrow amount fluctuates so it is recalculated 4 times a year. If the owners share is calculated at over 50%, players receive some of their prepaid money. If the owner’s share is less than 50%, the players pay out of that money pool back to owners.

NHL players are lucky if they see any of that money come back. Here’s the thing about that: the closer the collective teams spend  to the salary cap each season, the more money is taken from that escrow account and distributed back to the owners; similarly, the closer the teams spend to the salary floor, the more players received back from escrow. So, in a way, teams screw their players over by trying to spend as much as possible to win the Stanley Cup. This season, 18 teams spent between 98%-116% of the cap; cap overages are allowed for LTIR usage. 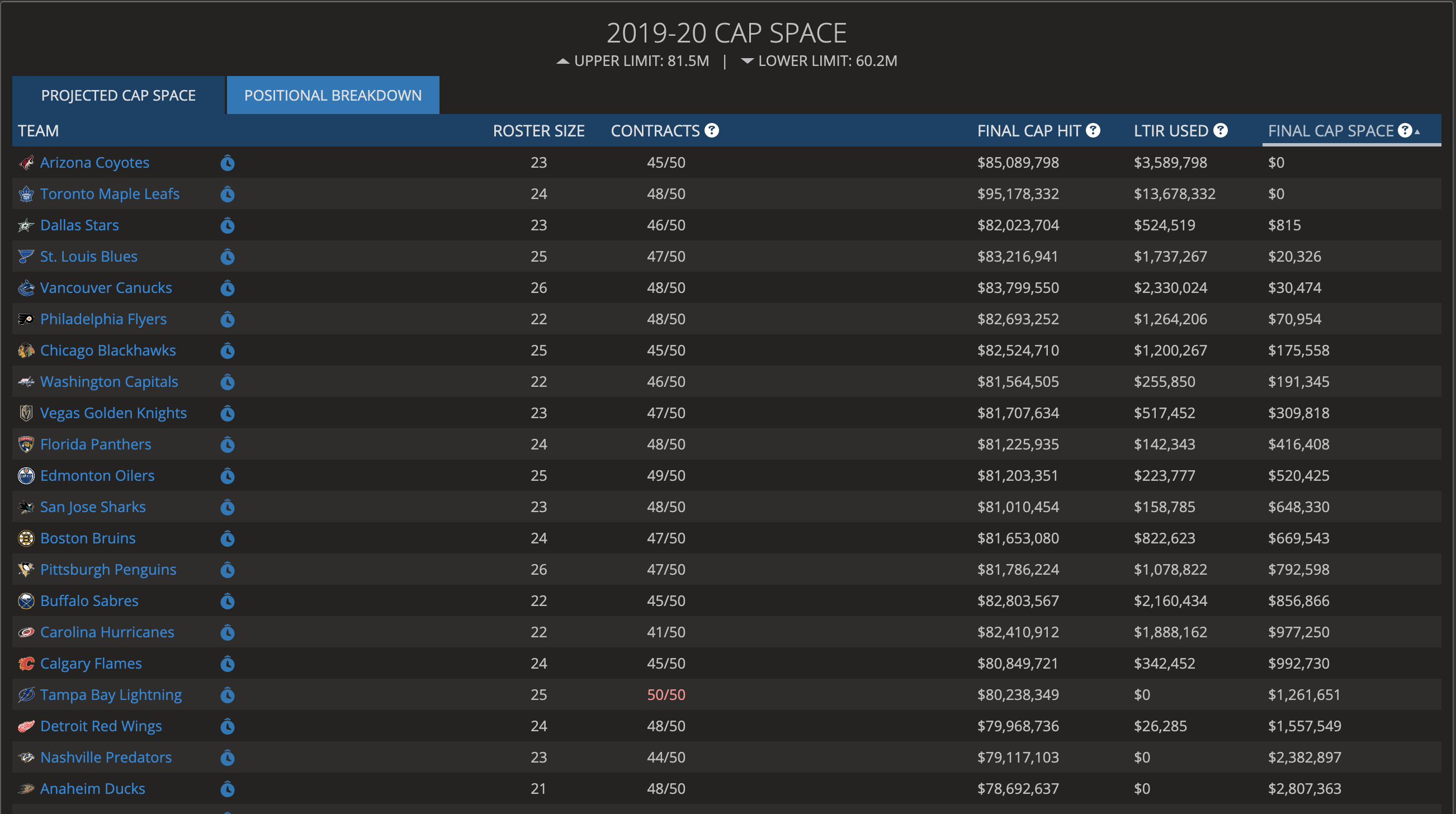 Over the course of the new CBA, the players will have to pay more in escrow because part of profit sharing is sharing in financial losses. It’s estimated that the players’ share of the losses will be $250-$500 million dollars which will be paid back through escrow in the following seasons of the CBA. The escrow for the 6 guaranteed years of the CBA follow:

So, that’s the only money the players have to pay out, right? Wrong. Of course, there are agent fees (between 3%-6%) and get this: for every day that an NHL player is on an NHL roster, they pay $30 to the NHLPA. Between gamedays, non-gamedays, breaks, and such, the NHL season can run about 185 days. That’s $5,550 in fees. Sure, it may seem like chump change for the stars, but for the fourth-liner who doesn’t have huge upside and could be in and out of the NHL quickly, that’s money they aren’t seeing for spending their life playing hockey.

Yeah, I know these guys get paid to play a game they love. But, they get nickeled and dimed along the way. These guys have to have to stay in top shape all year round which often leads to further training expenses. Players may have endorsement deals and other monetary sources which is great because they need to earn as much as they can since the league has been known to chew players up and spit them out without a second thought.

We’ll get a little more into the CBA in the future.

Forbidden Planet is on TCM now, for those with a lil time. Classic!

You know how some people brag that they have never used Algebra since they took the class? I had to do a bunch of algebra to determine the numbers for HRR. There was a bunch of poorly done algebra performed before I came up with the correct and very simple equations x+.0.15x = 80.5 and 0.85x = 60.2.

Since I was only dealing with 3 significant figures and only 1 decimal place, x = 70.8. from there I multiplied by 2, then by 31 to come up with the total HRR for the league. The league reported $4.8 B in total revenue last season so there is some $400M in other revenue last season.

I had to use a bunch of math. I like math, so that’s good.

Woo-hoo!
I love me some accounting talk!

I love the smell of mimeograph printing in the morning. Smells like… bureaucracy!

Got to see a little hockey yesterday. It was nice, but I’m still confused by July hockey.

I don’t honestly know since months of isolation have devalued the meaning of time, but my computor says “Jul 29” at the top of the screen, so I assume that’s what it means.

Maybe the month is really called “Jul”. I don’t know.
All hail computor, the giver of knowledge!

My thermometer says July in hell!

Wow, who the hell came up with that system?!

Caught most of the Pens flyers game. Good standard considering how long they’ve been off.

They played crowd noise after a goal, but it sounded kinda distant. Along with the covered seats in loge it had kind of a Winter Classic vibe I thought.

Looking forward to see the Bs in action!

I didn’t mind the crowd noise. It was at a low enough volume.

Good Morning!
CBA must stand for “confusing bullshit addendum”. Well explained, GH. Once I read it a few more times….. I still will be confused!
Watched some ‘Guins vs Flyers yesterday. Live hockey. Wow, can you imagine???? Can’t wait to see the Bruins play!!
Charlie is making some bank this year! Wow!
Good day to mow today!! Nice mindless task. I can think about that CBA all day!!