One of these days I will actually do what I said I would do: viewing all the Bruins media Zoom calls and summing them up and  giving my impressions. It wouldn’t take long but I really have to be in the right mindset to absorb it, to have an attention span that is longer than that of a fly, and to be able to get past the screenshot of Sean Kuraly looking extra fine on his call. 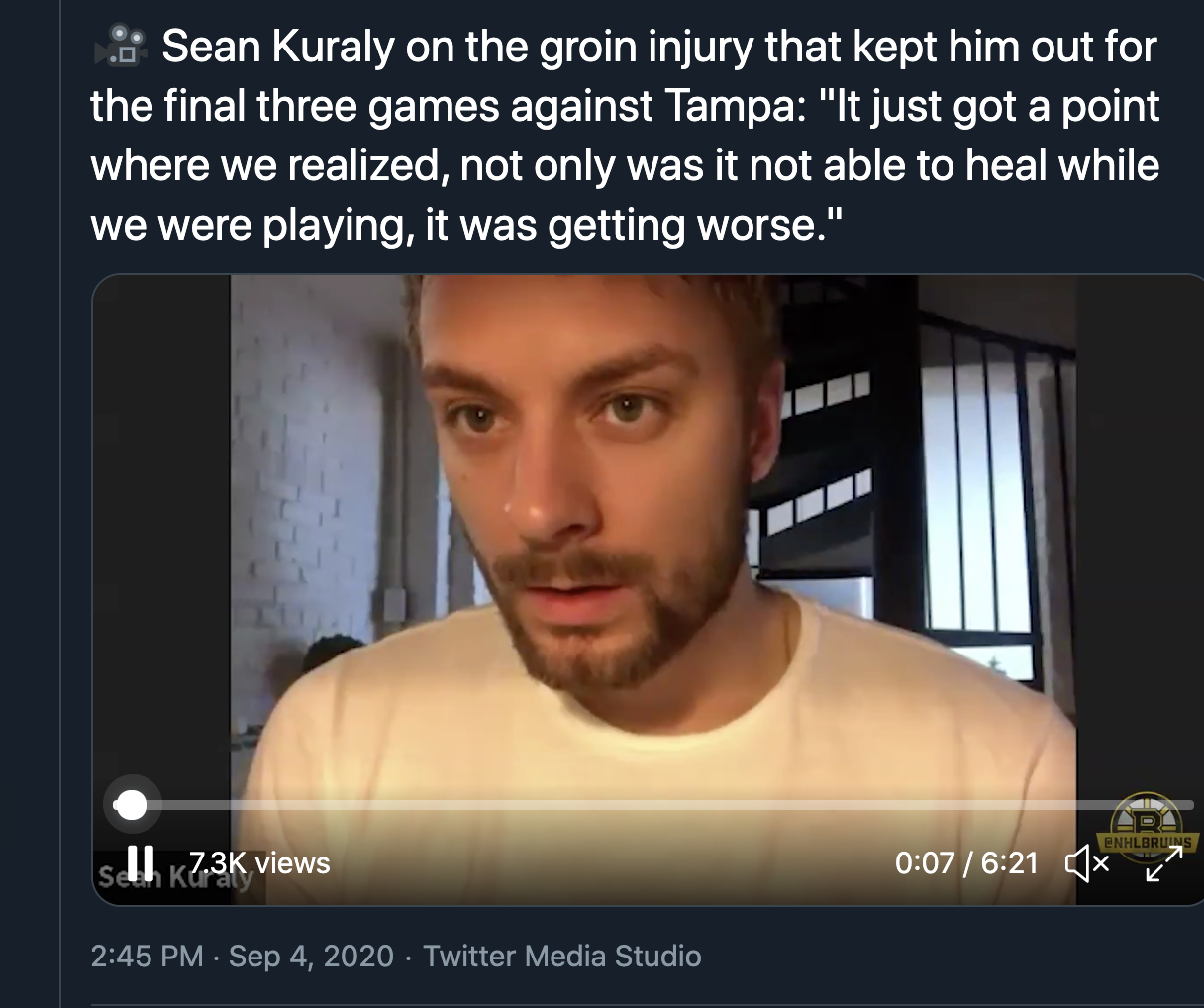 So, while I’m still trying to get my act together, let’s talk about the NHL Awards. Yeah, I know that most of the time we don’t really care about these. However, this season being unique due to a raging pandemic making itself right at home here in the US, so the awards are being announced virtually and on air during the hockey game intermissions. This year, there are some really interesting results so far.

On Sunday night, the winner of the King Clancy Memorial Trophy for exemplary leadership on and off the ice went to someone I wanted to win: Matt Dumba of the Minnesota Wild. Dumba has been very vocal about leveling the playing field for hockey players of color and changing hockey culture. He is a co-founder of the Hockey Diversity Alliance who wants to work with the NHL to make the sport more diverse, especially in areas of leadership within the league. After the murder of George Floyd, he’s worked within the community to fundraise to rebuild BIPOC businesses that were damaged during protests. Really, that’s just a drop in the bucket of what he’s done.

On Monday night, the Masterton Trophy was awarded to the Ottawa Senator’s forward Bobby Ryan. After taking two months off during the season to address his addiction issues, he returned in February sharing his story so that he could inspire others who may be struggling with their own substance abuse issues. Despite being a professional hockey player, Bobby Ryan has not had the easiest path through life or to the NHL and not taking care of yourself can take it’s toll. Hopefully, he’ll keep on the right path for him.

Finally, on Tuesday night it was all about Willie O’Ree and seeing the results of his grassroots efforts that he’s been making for so many years now. The 3rd annual Willie O’Ree Award was presented by the man himself to Dampy Brar of APNA Hockey School in Calgary.

Brar is bringing hockey to the South Asian community in Calgary and also reaching out to India to inspire people to play the sport which is wonderful because if there’s one thing that Willie O’Ree has taught us it’s that hockey is for everyone.

Hey, I got my license renewed at long last! I struggled to find an appointment locally but found one up in Tewksbury for this morning. Also, I went to Tewksbury for the first time today. Most of the people were very friendly. One guy had been waiting a long time and was a grump.

Heading north tonight!! Work on house tomorrow, try to get a lap in on Friday to prep for the big race

No computer, no work!!! Take the rest of the day off. Tell ‘an Stripes approved it.

Where can we order our Team Big Blue shirts???

Hey All!
Yup, hockey is for everyone!!! I saw that more and more over the years and that makes me happy. Especially at entry level, where people’s faces really light up as they discover the joys of the game. I’m happy to say that the same thing is happening in the whitewater world. Paddlers of every shape, size, and color are out on the rivers having fun. Women are probably the fastest growing demographic on the water. Diversity brings more fun!
Fell asleep about 8:15 last night so missed Vegas vs Stars. I hope the Isles can make their series more competitive in game 2.

Also missed most of Vegas vs Dallas but I’m in no hurry to find a replay. Though if the WCF is actually swinging back & forth it should be good to watch. I liked game 1 of that series.

Isles had best wake up, but it may not matter – Tampa is consistently playing like a Stanley Cup Final team.

I wonder if Tampa learned their lesson after last year’s ass kicking.

Morning folks and thank you VA for that uplifting MFA.

I don’t know about the States, but here there is concern our big cities are gong to vecome ghost towns with everyone working from home.

It wasn’t as dead as I expected, although the tourist hotspots were certainly quieter than usual. But it was a Tuesday…

To avoid public transport I made it a walking tour. Covered 18km, so got a good bit of exercise too!

18km? You weren’t fooling around!

Things around here are quieter than they used to be, but they don’t even compare to the Bergamo lockdown (though some neighborhoods in NYC got there during the surge). We’ve gotten to an interesting balance around here. A fair amount of folks are out & about but office buildings are largely empty. Restaurants have outdoor seating only. It has been fine for now where interstate travel has been minimal, but I think we’re in for some issues as schools open up, and folks from hot areas travel back to manageable areas.

College towns are getting big surges as students who come back on campus have been irresponsible in private settings. Republican-run states are pushing their schools to open for in-person classes regardless of safety planning. I’m really getting weary of the never-ending hellscape of willful mismanagement and lies.

There’s fears here that universities starting back up is going to cause second wave. Under-30s haven’t been so strict in observing the rules.

I’m definitely curious what kind of tourist numbers foliage season is going to bring here. And also very curious what the mountains do about ski season.

I’m wondering the same thing, although we have had visitors to the area all summer.

Same, a good chunk of out of state folks decided to come up here and stay long term now that they can work remotely.

I haven’t even tried to go out to Boston. I already have a little bit of social anxiety and I’m not sure being in a large city will help that right now. I do get bored walking around here so maybe I’ll head to the city for a day soon. I bet Boomer would like a walk oyt that way, it being his hometown.