The Stars never lost their lead from the time they scored in the first. Though they had to share a tied score for about 20 minutes, once they broke that logjam, they were able to prevent the Lightning from scoring. It wasn’t easy since the Bolts led in shots on goal with 36 to the Stars’ 20. In fact, Dallas only took 2 shots in the third, one of which was the empty netter.

Anton Khudobin continues to play with the hot glove, keeping his team in the game and earning first star on the night.

Tonight, Game 2 is on NBCSNPDQOMGWTFBBQ. In fact, here is the schedule and networks for your viewing pleasure. 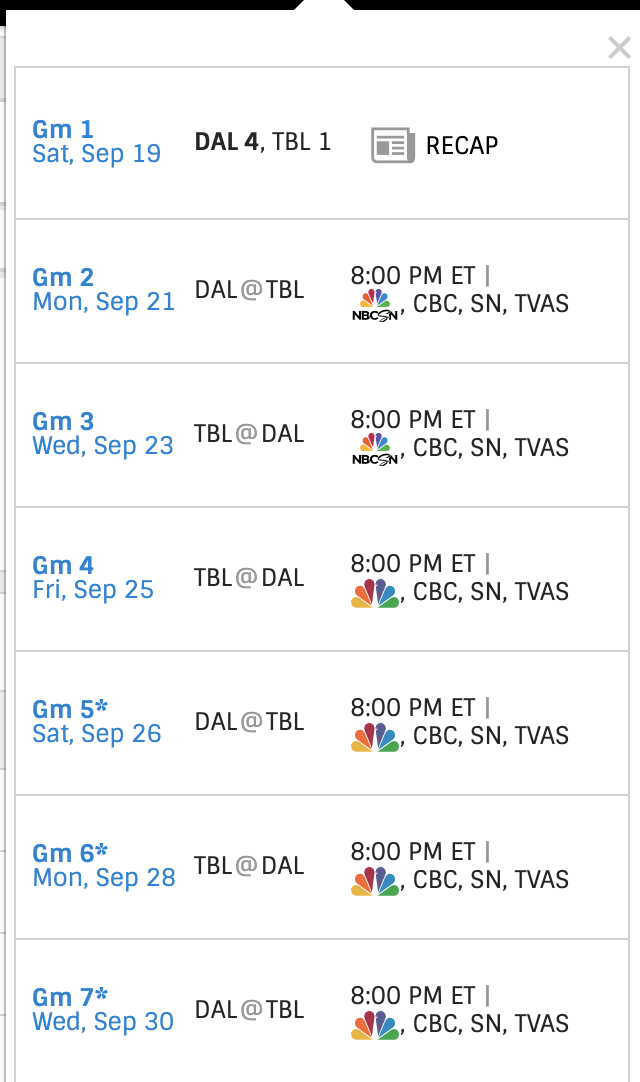 But, that’s not what I really want to talk about. Instead, let’s talk about how that little Canadian show that could won all sorts of Emmys last night.

With Catherine O’Hara, Eugene Levy, Dan Levy and Annie Murphy winning their #Emmys tonight, that means our little Canadian show is the first comedy OR drama to ~ever~ sweep all four acting categories, and that is absolutely wild 🇨🇦 pic.twitter.com/fEUnaLoDBr

Eugene Levy for Outstanding Lead Actor in a Comedy Series

Catherine O’Hara for Outstanding Lead Actress in a Comedy Series

Catherine O’Hara wins the first Emmy of the night for Lead Actress in a Comedy Series for “Schitt’s Creek”! https://t.co/tH3sYrGN8B #Emmys pic.twitter.com/23iosAydaR

And Annie Murphy for Outstanding Supporting Actress in a Comedy Series

Canada should be so proud!

Morning all. Moira Rose got her Emmy and that warms my heart. It was fun to see this show gain popularity. Spent a relaxing day yesterday watching some Star Trek: TNG and DS9 because I wanted to hang out with my best friend Worf.

Have you ever watched The Orville? It’s Seth MacFarlane but there’s not much of his style of humour in it. Well, there is some but it’s mostly a homage to Star Trek. Sonia enjoyed it and she doesn’t like Family Guy.

I haven’t watched that one. I should put it on the list.

Looks like we have one more summer coming!! That will be Thursday!!! Woo hoo!

One of the new services we provide at work is spot-previews of sports events with a betting tip for bookmaker websites. These are 30 words. If you’ve never tried to preview a sports event in 30 words, I can tell you its a bit of a challenge! However I did advise Dallas might be a good bet for game one given the Lightning could be tired.

Had to give zoom chat a miss on Saturday- didn’t sleep well Friday night and we had a big countryside hike planned for Sunday so needed the rest!

I’m having a nice wander round Camden market – it’s very quiet compared to the before times when the tourists would pack in like sardines. I expect the vendors are missing it though.

I hope your preview was just the picture of Dobby in the shopping cart with the watermelon!

I might pitch that – why bother with any words, just have a picture!

When it doubt, bet on the crazy goalie!

Hi Pals!
We missed everything this weekend!! My son and his GF came to visit Saturday (after they did mountain coaster at Berkshire East). Fireside dining and drinking!!! Big fire as it was cold!!
Will definitely watch tonight. Go Dobby, go!!!
Also, we need to watch Schitt’s Creek. I’ve heard a lot of good things.
Motown Monday!! Good thing we’re not Zooming now as homie got his dance on!!

Sounds like a great Saturday night! Hear ya on the cold, 29 this morning!

And was JoAnn lurking around Waitsfield, VT this morning? Saw a white Econoline van driving around on my morning walk!

There are a lot of those vans!! I think No is at work, but she may have teleported to Waitsfield…. Tom Waitsfield??

Motown Monday!! Good thing we’re not Zooming now as homie got his dance on!!

Are we talking vinyl here?

I was thinking the other day about the Discman I used to have. You could listen to a CD while walking around and it wouldn’t skip, if you were lucky!
25 years later and with my Apple music subscription I can listen to any album I can think of as long as I’ve got my phone with me.
Technology got a lot to answer for but it’s not all bad!

I was thinking about cassettes yesterday. Was listening to Automatic for the People and could clearly imagine the yellow cassette again.