Morning Free Association: Another One Down

Tuesday it was Kuhlman, yesterday it was Senyshyn. The Bruins announced that they have signed Zach Senyshyn to a one-year, two-way deal worth $700,000 at the NHL level.

The #NHLBruins have signed @ZachSenyshyn to a one-year, two-way contract with an NHL cap hit of $700,000. 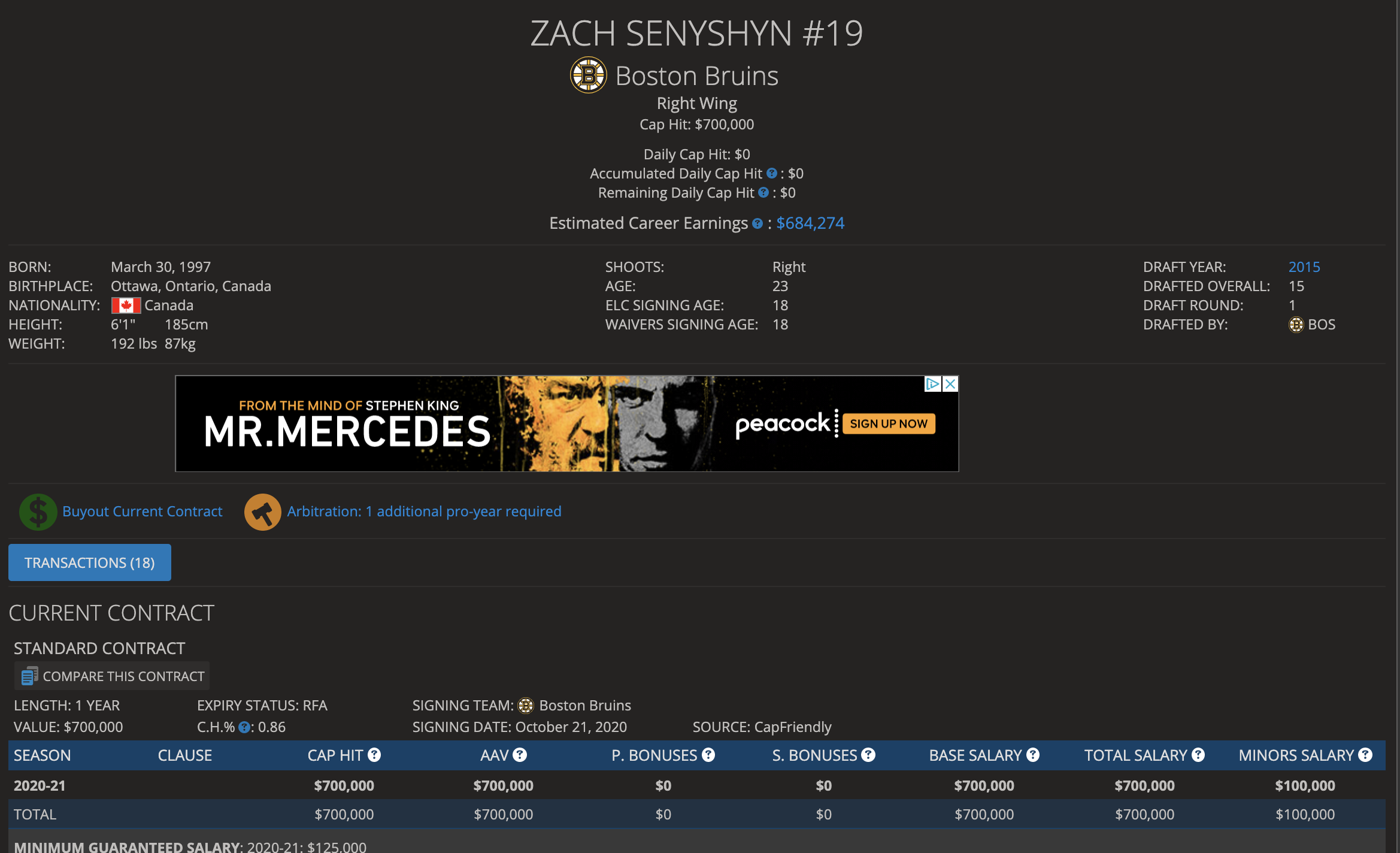 Like Kuhlman’s deal, at this point his salary doesn’t count against the cap since he’s likely to not crack the top 13 forwards out of camp. Senyshyn at this point looks like he could be a career AHLer; his numbers aren’t great with the Providence Bruins and in his 3 years with the P-Bruins, he’s been called up to the NHL for a total of 6 games. Quite frankly, even though he was a first-round pick in 2015, he’s going to be leap-frogged by many other players (Kuhlman, Studnicka, Frederic) in the coming seasons.

Now, Don Sweeney only needs to sign Jake DeBrusk to his one-way deal and Peter Cehlarik to a two-way deal.

I have to make the effort to remember that picks are made by info from scouts, so Sweenius should get something of a pass on those three first round picks.

Morning all. Live footage of my morning walk:

There’s some chick in a knit cap who keeps showing up and telling me how scared she is. I keep telling her to go away but she keeps coming back.

I overslept a bit this morning. Just wait until we make the change! Which I could live without, TBH

Our clocks change this Saturday night. Remind me on the Zoom call!

Hey All!
I hope Zboril develops into an NHLer. Three first round picks, Donnie’s first as GM, maybe. You’d like to see at least two of the three turn into players. I remember criticism of the Senyshyn pick at the time. I think his speed was supposed to be off the charts. Especially troubling as Barzal went with the 16th pick that year.
Back in Connecticut for a couple days. The foliage in Western Mass may be past peak, but it is still spectacular…. very gold this year.

On a walk in the countryside last weekend we were in one field where we could see a farmhouse against a backdrop of trees with a million different shades of green and brown among the leaves. It was like standing in a Bob Ross painting. Beautiful.

Yeah, there’s a lot of Bruins fans who will never forgive Sweeney for reaching down for a guy who was expected to still be hanging around by the 2nd round when Barzal seemed like a sure thing.

I’m disappointed in the foliage around here this year – the maples all finished their cycles before the elms & birches started to turn. I also haven’t been commuting through the back roads each morning so I may have missed some good days.

My drive through the western hill towns is spectacular even on the worst of days. I’m so happy to be moving to one of the most beautiful places on earth, IMHO.