Finally, the Bruins have shored up one more player on their roster, added another piece of the puzzle, and are one more step closer to figuring this all out. Yesterday, Don Sweeney finally signed Jake DeBrusk.

The 24-year old left winger agreed to a bridge deal for 2 years and $7.35 million, with an annual average salary of $3.675 million. Thanks to CapFriendly, we know what that contract looks like. 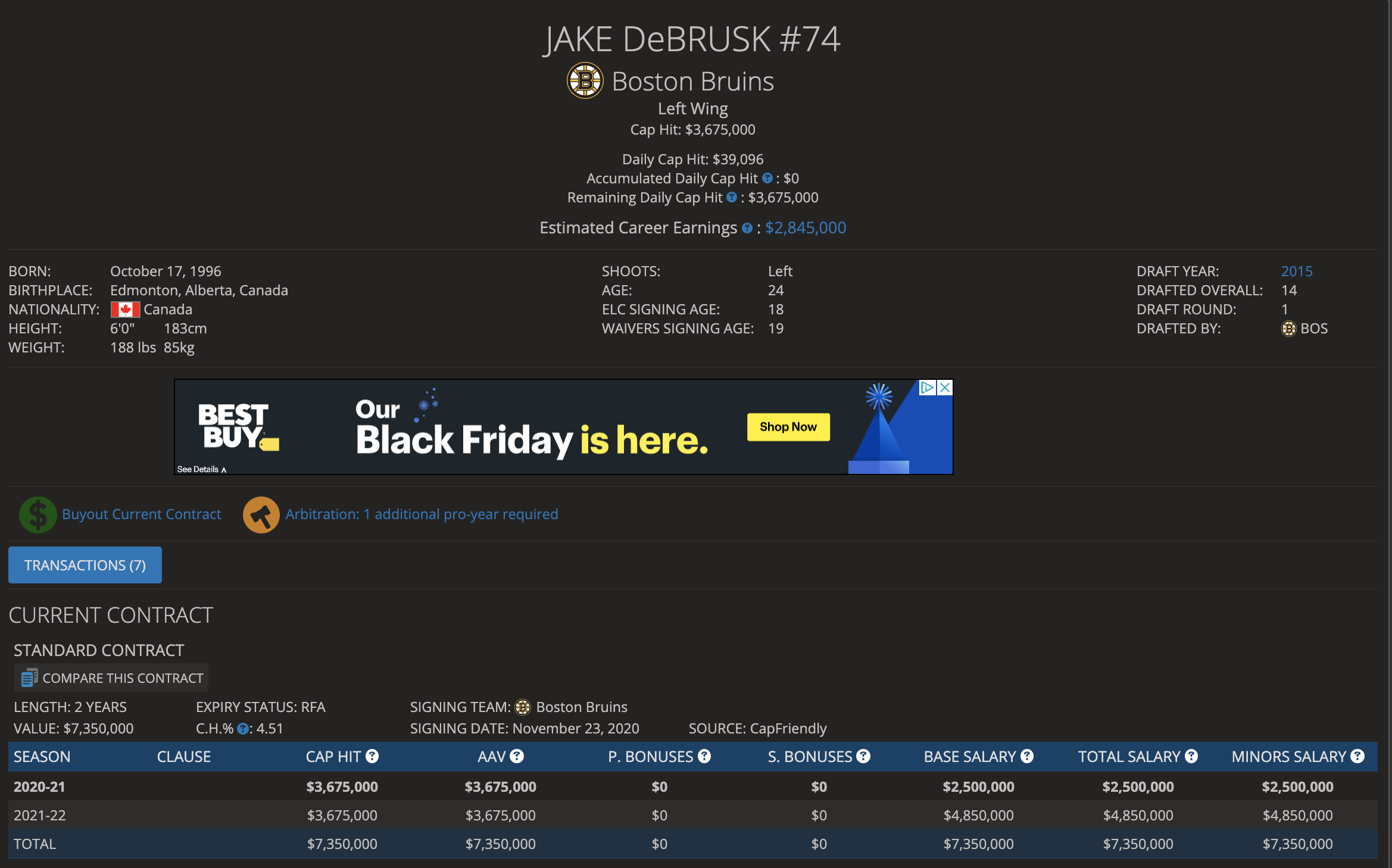 At 6pm, Don Sweeney held virtual media availability to discuss DeBrusk’s contract. One of the first things that he admitted was that both parties were trying to hammer out a long-term deal but that he was partly responsible for that falling through. The other issue was the financial climate and the uncertainty that the pandemic has brought to the league.

Sweeney looks at this deal as time for Debrusk to become a more well-rounded player. He cited DeBrusk’s speed as a reason why he could develop his penalty killing and forechecking skills; as of now DeBrusk usually is not called upon as a penalty killer. He said there was no reason why Jake couldn’t have more of a net-front presence, a position from which he scored many times last season. The Bruins GM also believes that this could be the opportunity for the young winger to shake out some of his inconsistency.

🎥 #NHLBruins GM Don Sweeney reacts after inking Jake DeBrusk to a new two-year deal and provides an update on where things stand with Zdeno Chara: pic.twitter.com/2MWgIpUsUE

Toward the end of the media availability, local favorite reporter, Amalie Benjamin, asked about progress with Zdeno Chara. Unfortunately, there is nothing new to report. Apparently Chara and his agent, Matt Keator, are exploring their options and waiting for the league’s plan for the upcoming season.

That’s… an entirely reasonable contract for a guy at DeBrusk’s stage of development. And it gives him the opportunity to get paid big money as soon as the teams can fill arenas and raise the cap ceiling.

Morning all. Did a little bit of ice skating on my morning walk. Just enough black ice to make it a little extra fun.

Agh! Time to get the cleats out!

It’s those little surprises that make being a New Englander so much fun!

I love this time of year when the temperature is such that you play the fun game of innocent condensation or icy death trap of doom.

My tailbone hurt just watching some of those!

Ok, folks… Let’s play another round of “Dew Or Death!”

God, i miss skating. I`ve got to get out there at least once this year…. pain or no pain.

More hockey people get hurt by slipping on black ice than get hurt on the rink….. i`m making that up, but i do know of several instances where it was true.

That seems a decent deal for the team. JD has shown plenty of potential – the next two seasons should be enough to find out which way he’s going to develop.

Yeah, does seem like a good “show us what you got” deal before committing long term.

Good Morning!
Glad Jake is locked up for a couple seasons. Needs to be more…. yup, everything.
Were holding our breath for Jos covid test results. Her truck driver tested positive. Two people who ride to work with him (maskless) have tested negative. The employee who resisted wearing a mask at work is now wearing one religiously and wasking his hands constantly. This shit is real!
Fingers crossed, eh?

Fingers crossed for you!