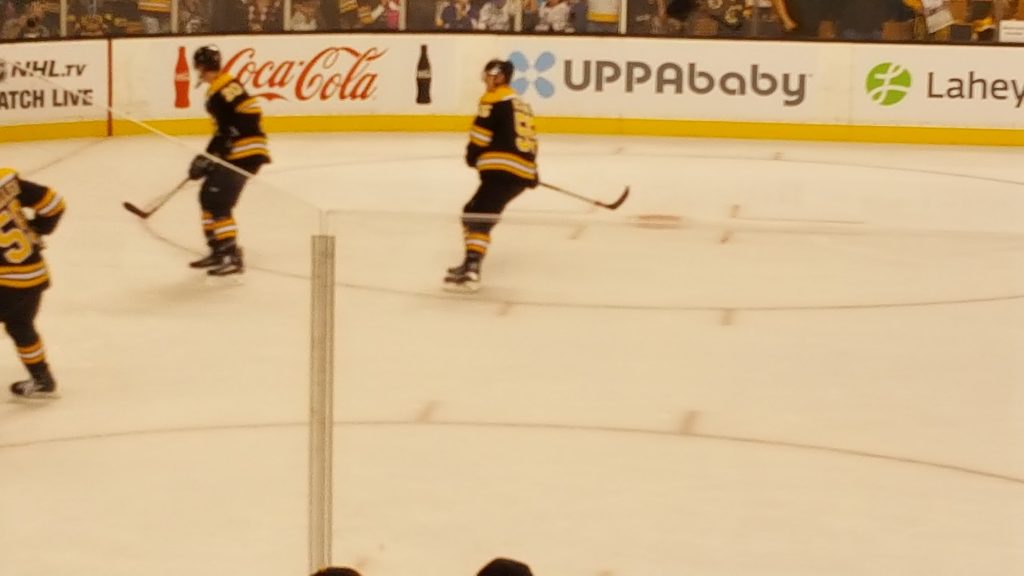 The Bruins continue on the road, playing a 2nd game against the New York Rangers at Madison Square Garden.

The Bruins were on the road, battling their hated rival, the New York Rangers.

The game was a faster game, but not a particularly high-scoring one. Both Tuukka Rask and Alexandar Georgiev were putting in some solid goaltending.

A few interesting events
1. A goal on a high stick – in a net-front cluster a Ranger forward played the puck at near shoulder height. Rask defended that but the deflection was tapped in. Rask immediately signaled for a high-stick wave-off, but the officials decided that while the puck was played above the height of the crossbar, the scoring shot was not, and the Bruins bench did not feel they could challenge that the puck was played with a stick above the shoulder (which would have merited an immediate stoppage of play).
2. Jake DeBrusk’s near goal. DeBrusk pinged a puck off the crossbar and into the net, but it was waved off as having been on the goal line. Replay showed the puck ambiguously close to being completely over the line but likely not – the no goal call stood.
3. In the 3rd period, Chris Wagner made an ugly hit on Anthony Bitetto, getting his knee between Bitetto’s legs from behind, then coming in front of him and shoving him in the shoulder, knocking him over. Bitetto, presumably angry at the slewfootiness of the whole affair, immediately started punching Wagner, not allowing the Bruins forward to get his gloves off. They would get 7 minutes each for fighting and high-sticking vs roughing.
4. Brad Marchand, possibly sensing that Panarin was banged up, checked Artemi Panarin hard into the boards in front of the bench. He continued to put the pressure on and Panarin began to fight back in an unusual tussle between star scoring forwards. Panarin was moving slowly afterwards.
5. Late in the 3rd, Tuukka Rask would leave the crease and head to the bench for an extra skater – that is until he heard the Bruins bench yelling at him that it was a 2-2 game and that they wanted him to get back in net.

36 seconds into the overtime period, Brad Marchand would score the winning goal after a steal by Patrice Bergeron and a bounce-pass from Charlie McAvoy.

The Bruins are now at 9-1-2, putting them 1st in the MassMutual East division, with 2 points and a game in hand against the #2 Flyers.

Forward Ondrej Kase, is still on IR. Craig Smith has been playing on the Krejci line, with some success.

Jake DeBrusk and Matt Grzelcyk returned to play on Wednesday, but Grizz has yet another lower body injury, and will not play tonight, so say hello to Connor Clifton…

DeBrusk was playing on the Coyle line, and made some good plays with Anders Bjork, so he will be there again tonight.

Jaroslav Halak will be in net.

Today the Bruins will face the New York Rangers. This will be the first time this season the two teams have faced off – they have not played one another since February of last year.
They have a few injuries right now, with Artemi Panarin leaving Wednesday’s game, Brendan Smith listed on the injury report with upper-body injuries, Jack Johnson with a lower body injury. Justin Richards is out via COVID protocols.
The Rangers have a lousy record of 4-5-2 (10 points), putting them in 8th place in the division, but 6th in points percentage. They have won 3 of their last 6 games (one in OT). Artemi Panarin is still their biggest scorer with 5 goals & 10 assists.

The arena seemed strangely unclear about the goal. Ref was nowhere to be seen.

Cliffy, back off already – you’re getting away without being sent to the box.

It’s a good one. Watching with Jo

Why do our defensemen hate our goaltenders?

I remember Kaako from the Worlds a couple of years ago – he was amazing. Didnt do much last year in the league but lots of potential.

Yeah, Kakko is dangerous. I was surprised how young he is – they had a graphic up showing that at 19 he is one of the youngest players in the league – but he was with the Rangers for roughly the whole season last year.

How many of the Rags have not scored an NhL goal yet?…

I think Shesterkin is due

HAH! Marchand & Zibanejad are both trying to be the last guy off the ice for pre-game skate. So they’re alone out there – Marchy doing stretching exercises and Zibanejad taping his stick.