I could talk about the Boston bruins continued problems with the New Jersey Devils but there is nothing compelling about how the Bruins keep losing to this team. Yep, they lost again in a low scoring affair: 1-0. It felt the same as other games.

Today, though, I’d rather focus on something that happened Friday night and the consequences that played out over the weekend.

On Friday night, Bruins defenseman Brandon Carlo was demolished by a Tom Wilson hit. The hit was high, it was violent, and it was not penalized at the time by the on-ice officials. Wilson would be challenged by a couple of Bruins (Jarred Tinordi and Trent Frederic) and the B’s were buoyed by their actions to win the game handily. Carlo had to be helped off the ice, not by stretcher, and was transported to the hospital where he stayed overnight.

Carlo needs help getting off the ice. pic.twitter.com/RgACye1H7l

The next morning, NHL Department of Player Safety announced via tweet that Tom Wilson would have an in-person hearing via Zoom for the incident. Later DoPS gave an update that the hearing would be that night. Before 11pm Saturday night, NHL DoPS had given their ruling: it was boarding and Tom Wilson would get a 7 game suspension.

In their ruling they stated that aspects of the situation on their own may not have led to a penalty but the totality of Carlo battling for a puck in the corner with Vrana, looking down to find the puck, and Tom Wilson’s angle of approach all contributed to boarding. In considering the proper punishment, the DoPS team factored in that it was boarding, that there was an injury, and that Wilson has a significant history.

On Sunday, while serving the first game of suspension, word came out that Wilson will not appeal the decision.

Hearing that Tom Wilson won’t be appealing his 7-game suspension.

This hit has sparked debate all over the web as to whether or not the hit was legal. One reporter, Frank Seravalli, seemed to take and endlessly defend his take about the hit being legal.

This will be an unpopular tweet, and that’s fine, because I don’t conclude based on reputation or narrative.

My opinion: Tom Wilson’s hit on Carlo is not illegal.

Carlo’s head is not the main point of contact. Break it down, sure looks like he gets chest/torso first. [Thread] pic.twitter.com/10fhMN1CAt

I disagree. It was a reckless, dangerously violent hit that needed a follow-up punishment. If the NHL is serious about player safety they need to take these hits out of the game. There are dozens of cases of former NHL players having problems before and after their careers are over because they suffer from post-concussive syndrome. We know this but refuse to take it from the game.

After the game, Washington coach Peter Laviolette was snide in saying that maybe checking should now be illegal in the game.

Peter Laviolette said he’s “hopeful” Tom Wilson will be available Sunday vs PHI. No word yet on when his hearing will be.

Laviolette said the hit on Carlo was a “hockey hit” and if that was a “suspendable play then all hitting really is going to probably have to be removed.” pic.twitter.com/b6hQmrN98u

“He’s gonna protect his player. I have no problem with that…He’s entitled to his opinion, I just happen to disagree with it.”

But I think the one person in the Hockey Twitterverse that has it right is Catherine Silverman: 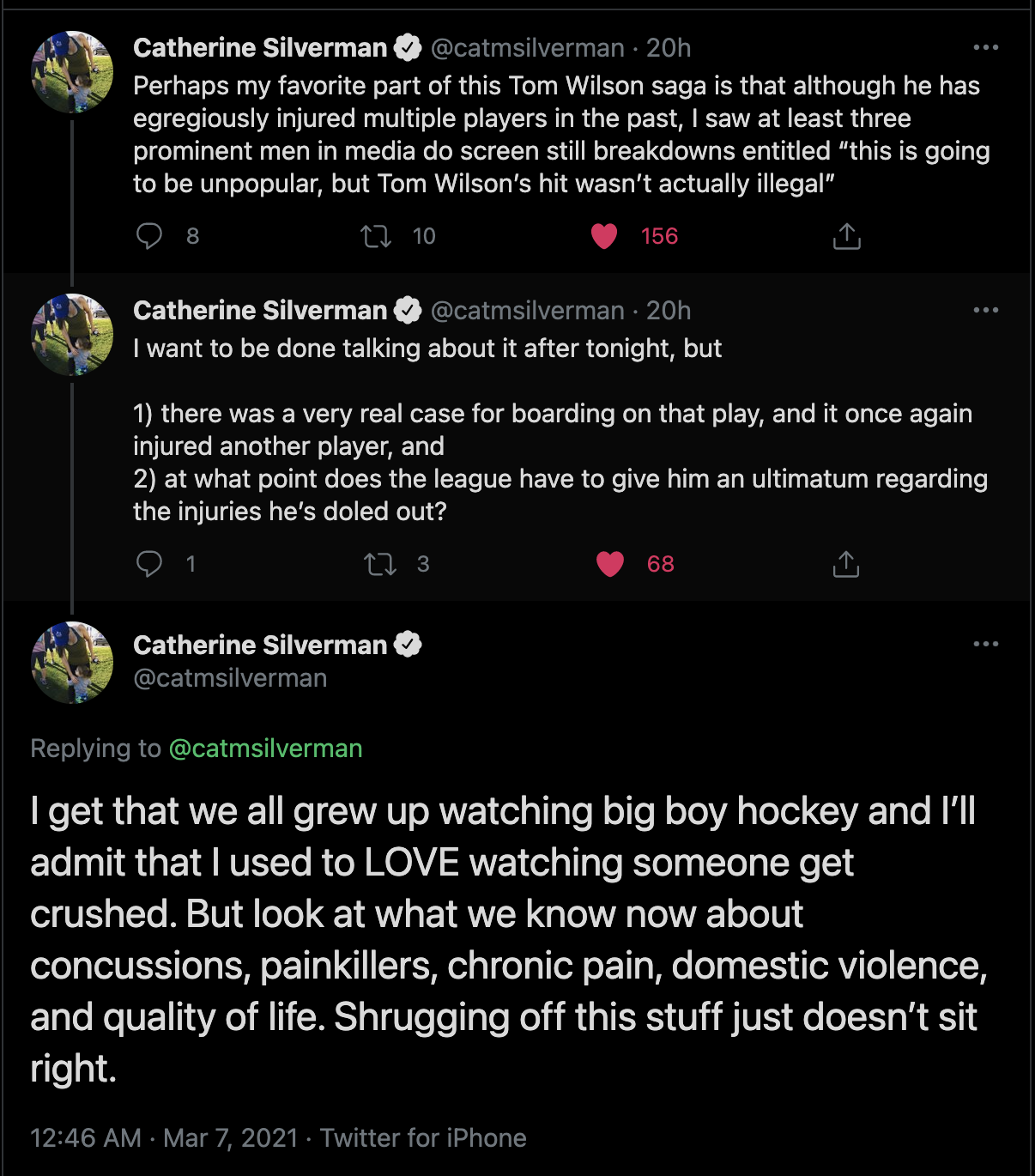 Shrugging it off doesn’t feel right at all. If a Bruins player did what Tom Wilson did, I would be ashamed of it. I couldn’t and wouldn’t defend that. I hope that all of us would be like that.

Brandon Carlo left the hospital on Saturday morning. Bruce Cassidy said he had texted Carlo, who said he felt better, but that he will be out for a while. Honest and pragmatic, Cassidy says that Carlo is to be considered “week-to-week” right now.

In a related kerfuffle, Marchand got a Devils defender in the head with a crosscheck

#NHLBruins Brad Marchand cross checks #NJDevils Ty Smith in the back of the head, no penalty pic.twitter.com/ph91qZBbWM


Obviously the Devils & Caps fans are disingenuously trying to claim some sort of equivalence to targeting a defenseless player. The video is cut too close to the incident to really see how it plays out, but it looks like a common net-front battle, where the defender grabs Marchand’s stick and Marchand cross-checks him in retaliation once he frees it. Not clear whether he actually goes for the head or if the stick rides up the guy’s back.
Either way, a bad look for a guy who was rightfully berating Wilson a mere two days prior. These sorts of net-front battles have rubbed me the wrong way for years. A lot of nasty things happen there, and no one says boo. I don’t respect the outrage very much because I see this happen every few games and there is no outrage until it is a controversial player. A bit of net-front de-escalation would be wise, because getting a stick to the back of the head is dangerous no matter what the game situation.

OMFG, Severalli’s tweet. I get it, sometimes you see something different than others, but starting it off like this:

This will be an unpopular tweet, and that’s fine, because I don’t conclude based on reputation or narrative.

tells me that he thinks he’s super clever & edgy, and that he’s not going to react to logic or counter-argument no matter how bad his take is.

I saw a lot of reactions out of Montreal & Toronto fanbases about how it was a perfectly fine hit, and Carlo must be soft, and they were all using roughly the same language – I knew that some dipshit in the Canadian media must have made those arguments and that they were parroting that guy. I think Frank is that guy.

Nah, he stood up to his full height AND raised his shoulder before the hit. No way he was aiming at anything other than head/neck.

The pipes here are wrapped with a heat wire. Also, I have an old stove hood with a light in it positioned over a vulnerable area. I cover it with insulation, an old insulated jacket, and plastic sheeting. Of course, the light bulb failed at the worst possible time. I have replaced it and reinstalled the insulation. I’m hoping no pipes have burst, but i won’t know for sure until later.

Are they still defrosting?

My mission, should I choose to accept it, will be to thaw those pipes.

I am clearly reading these things in screen order, not time-order this morning.

Good Morning!
Just my opinion, but Wilson’s suspension should be longer. He has already been suspended four times….. one of those for TWENTY games (later reduced to 14). Because of that history, his suspension should be longer than 20 games.
Not sure if you heard, but Mark Pavelich of the 1980 Miracle on Ice was found dead in his room at a mental health facility yesterday. His mental health problems have been attributed to multiple concussions. Time to wise up, NHL.
Okay, spent five days up north and came back to frozen pipes. My mission, should I choose to accept it, will be to thaw those pipes. As long winded as I am, I may have the hot air to get this done!

Mark Pavelich of the 1980 Miracle on Ice was found dead

Oh, that’s sad. We have a similar situation over here with ex-Rugby players – and even soccer players who get concussion-like symptoms from repeatedly heading the ball. Not good at all.

came back to frozen pipes

When we had our mini-freeze a few weeks ago I noticed the pipes to my neighbour’s outdoor tap (faucet?) had not only frozen, but burst, and was spraying water into the road. Had been for some time, by the looks of the road. Thankfully not a regular occurence!

I didn’t know that Pavelich suffered from concussion-related issues. Ugh.

not surprised about the suspension. No question it was a dirty hit – not a surprise from Wilson.

I actually managed to see all of the match, despite it being yet another in a long run of NHL.tv blackouts. Had a rare weekend off, so I avoided social media on Saturday and watched a full replay on Sunday, after the blackout was removed.

Impressive team effort. Liked Tinordi’s play. I thought it was a bit harsh of the Caps to pull the goalie – it’s not like any of the goals were on him – they were just great goals.

Last night’s game was yet another blackout but it didn’t look a classic from the highlights. Only two more blackouts this month!

All schools in England reopened today! It’s been lovely having so much family time but we were all very happy this morning! Hopefully they are able to stay open this time.

Sonia had her jab Friday. She felt crap Friday evening but was fine by Saturday morning, so that’s all good.

It looks like we are headed (albeit slowly) toward some form of “normal” before too long. Vaccine recipients in Connecticut have been told that they need to take whatever vaccine is available. Apparently, the lure of the single shot vaccine has made for long lines at facilities that are dispensing it.