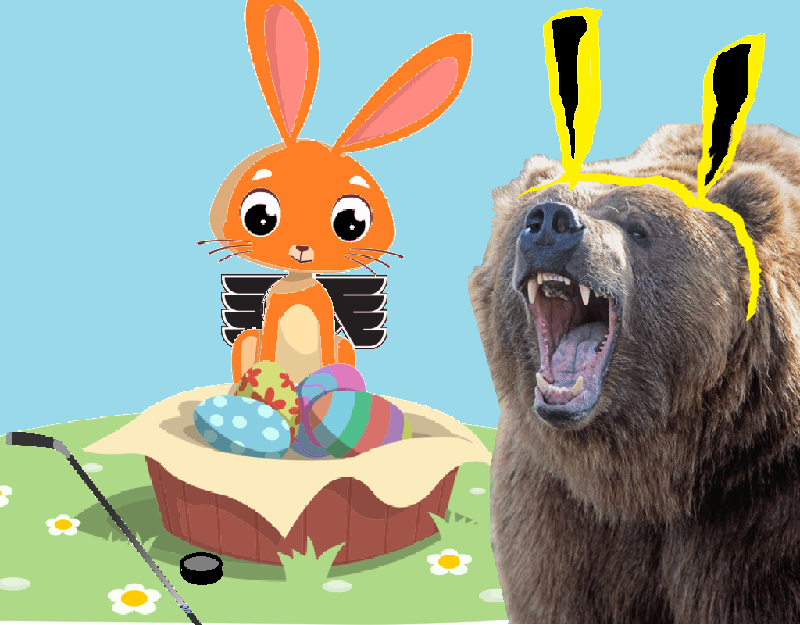 The Bruins are still at home, now hosting the Philadelphia Flyers, on this Easter Monday, to be broadcast on NESN+, and in other markets on NHL Network & NBC Sports Philadelphia

The Bruins hosted the Penguins, and were outmatched OR WERE THEY?

The Bruins and Penguins were playing a fairly evenly matched game, with the Bruins finding their scoring touch and getting out ahead. Marchy got him a hat trick, and Pasta nearly did as well, with the Bruins winning 7-5.

The Bruins are now at 19-10-5 which still has them at 4th in the MassMutual East division by victory points, 11 points behind the Caps, and 9 behind the Isles.
They are also 4th in the division with a points percentage of .632.

The lines were getting back to normal, but they are pretty messed up right now.

On the COVID protocol front, everybody, including Jake DeBrusk, had been cleared to play as of last night.
But then Jaroslav Halak went on the COVID list this morning. DeBrusk has only just started skating, and so seemed unlikely to play – Fluto reports that he is in the line up.

The Injury Report was calming down. Ondrej Kaše is skating, and Kevan Miller is practicing with Tinordi. John Moore had hip surgery last Monday and will be out all summer. but Brandon Carlo is out again, week-to-week, with a different injury.

Pasta had been underperforming in coach Cassidy’s eyes, and was swapped down to Krejci’s line last two games. This put Smith on Bergeron’s right side, and that was how they practiced yesterday, so we should expect to see it today. While Kuraly came back, Senyshyn is expected to be on the ice again.

Tuukka Rask remains out. Jaroslav Halak is now out, so Dan Vladař starts, with Jeremy Swayman holding the door for him.

Jeremy Swayman, in full goalie gear, rips off a string of figure skating jumps at the red line. Impressive.

This evening’s opponent are the Flyers. The Bruins have seen these guys 5 times this season, with pretty good results. Three of the 5 games were close, with the Bruins waking up late to come back from a deficit, once sealing the win in a shootout and once in OT.

The Flyers are fairly healthy now, with only Morgan Frost & Robert Hagg on IR, though Oscar Lindblom will apparently be held out tonight.
(h/t the Philly Inquirer’s Sam Carichi):

Marchand has reason to be mad, but his anger isn’t playing too well.

Bruins not making much of their opportunities in the offensive zone.

Bruins giving out consolation points like they’re going out of style.
Let’s not screw this up now please.

Get it now, Bruins!

I hate giving up a loser point. And the Bruins better not be the ones getting it tonight. Vladar deserves better

Let’s face it, one’s shooting percentage should be higher when the Flyers trot out Brian “red light” Elliot

Dude has sunburn on his neck the lamp gets lit so often.

Ugh! Lauzon has to learn that you can not use your free arm to obstruct the puck carrier

I thought he was getting onr on his previous shift. As soon as that free arm is extended, the refs radar is on him.

Bruins have not played Senyshyn since the start of the 2nd? Hrm.