Morning Free Association: One Down, Two More to Go This Week

Often when I finish watching a Bruins game, I think about what the story is and how to tell it. I just watched the Bruins at the Sabres and I honestly don’t have a real narrative here. Yes, I know narrative is a bad word in certain spaces like Twitter, but here it isn’t. So what is there to say about this game?

First thought: The Boston Bruins dominated the game from start to finish. While that is technically true in that the B’s held off the Sabres, prevented them from scoring, and managed to take two points in a 2-0 victory, it’s not really the theme of the game. Tuukka Rask was in great form and seemed very comfortable in net, earning his first shutout of the season in 18 appearances. He was clearly the best player.

“I think he was our best player. That goes without saying…Good for him.” – #NHLBruins Cassidy on Tuukka Rask

.@tuukkarask on his incredible lunging stop in his 51st career shutout: “Half skill, half luck. Kind of in desperation mode at that point when you can’t push over to that side. You just throw anything at the puck you can and hopefully it hits you.” pic.twitter.com/D8ChE50vYN

Second Thought: The Bruins did some really dumb things like take all the penalties in the third. Seriously, a great way to lose a game 3-2 after leading all game is to have to kill two penalties at once while the other team sits their goalie for an extra attacker, making 6 skaters for them and 3 for you. 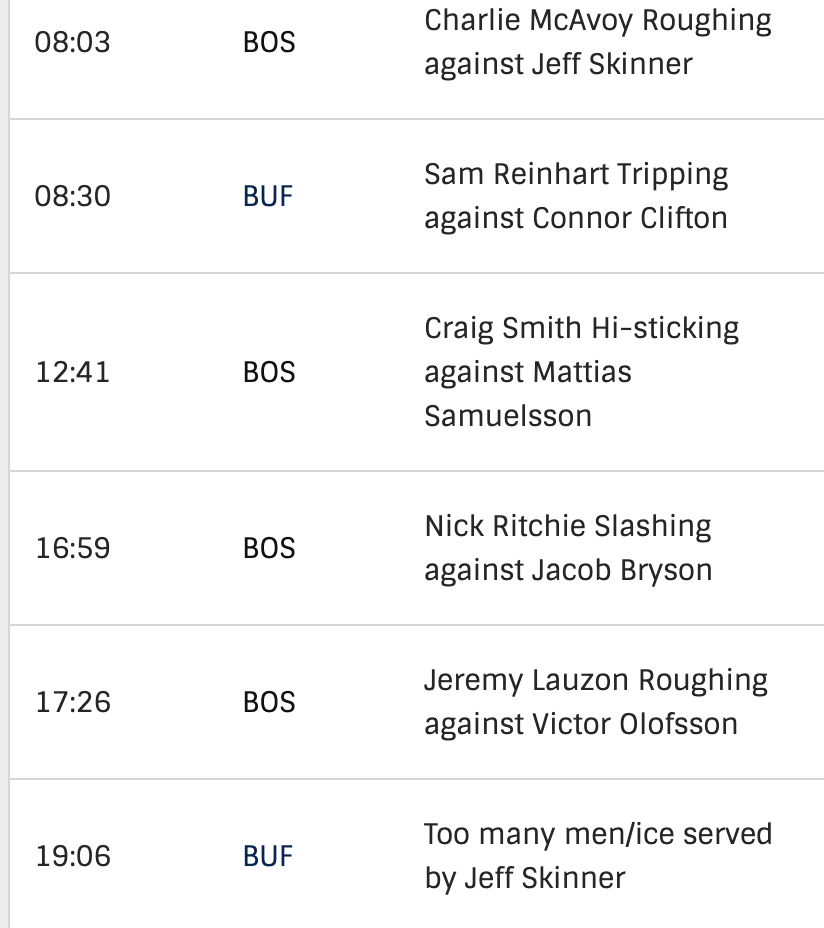 Thankfully the Buffalo Sabres, being what they are, they even screwed that up.

Third Thought: Without luck, the Bruins could have lost this game. While hockey is often a game of speed and skill, teams definitely depend upon the good graces of The Hockey Gods and Lady Luck. The Bruins had that in at least two instances tonight. While the first goal was scored by Brad Marchand off a puck that rebounded off David Pastrnak, the second goal by Connor Clifton was much more flukey.

I guess the story is this: The Boston Bruins went to Buffalo riding a four-game winning streak. The Buffalo Sabres have been playing better of late, 5-4-1 in their last 10 with wins against the Capitals (5-2) and the Penguins (4-2) in their last three games. It became not an offensive battle and not quite a goalie duel but a game in which the luckier team and the better penalty kill won. That team was the Boston Bruins.

Morning all. Who ordered the snow? And I hope you kept the receipt because I would like to exchange it for something more my style.

We’re having a clearance sale on tsunamis, how would that sound instead?

Throw in a funnel cloud and we have a deal!

Good Morning!
I guess you could say that the Bruins were both lucky and unlucky last night. With a good bounce or two, this could have been a blowout. With a little bad juju, they could have easily lost. Tuukka was the best player, hands down. That Krejci, Hall , Smith line had it goin’ on!
Foraging season has begun! Ate ramps (wild leeks, some call ’em) yesterday! Fiddlehead ferns are next!

Ah, nice. We’ve got a lot of wild garlic round here (which I think may he a similar plant??). It makes a nice pesto.

Would love to be able to forage ramps, bit they don’t grow out this way (Anonymous is about 100mi away). Unfortunately, fiddleheads don’t float my boat. Dandelion greens & sorrels aren’t interesting enough to be worth my while, and we don’t get enough raspberries or blueberries to really sustain foraging.
Hopefully I put in the effort to get the vegetable garden going this year. I always enjoy the tomatoes & peas. At the very least, I should be able to get mint, sage, parsley & thyme. The first stuff I planted when I moved here was Parsley, Sage, Rosemary & Thyme – I only planted sage because of the song, and I still have the same sage plant, 20 years later. And I use like 5 sage leaves a year.
I had to aggressively fight back the garlic chives because they tried to take over the garden. I dumped them in an untended part of the yard, and now they grow wild. I also planted coriander, but the plant grew into a damn hedge shrubbery. I ripped up most of it, and it was still way too much.

Yeah, the Bruins were absolutely the better team, but there were a lot of opportunities for lucky bounces to swing the game one way or the other. The penalty-fest in the 3rd period was dumb. I mean it’s good practice for the league’s leading penalty kill, but yeek. The Caps or the Pens would have pulled out the win given that situation.

Hey, a win’s a win! And the Sabres aren’t a joke team anymore.

The highlights made it look pretty dominant for the Bs. Bizarrely this was a blackout game for me. I say bizarrely because it was not on TV on any channel in UK! I’m guessing this was a rearranged game, and that the original fixture had been part of the TV contract. Who knows.

I’m wondering whether I can use a VPN to watch sport streams on NBC.com. do you guys have to pay for that one, or are national broadcasts free? I will look into it – could come in handy come playoff time.

Hey, if the Bs ride this streak they could end up on top of the division! It’s not impossible …

NBC is free with any cable package, mostly paid w/ ad revenue, though I think “Peacock” 9their streaming) charges for unbundled service