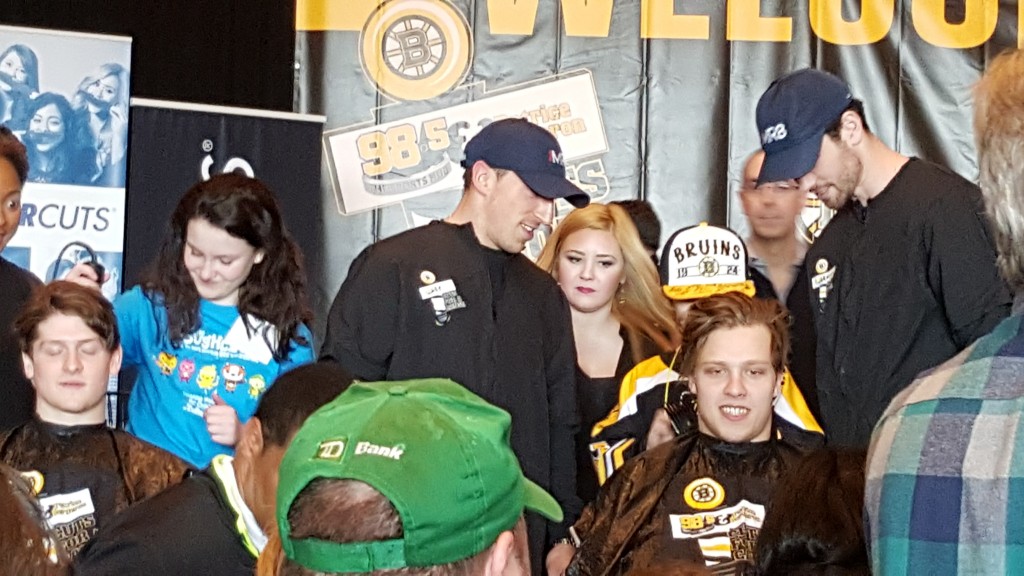 David Pastrnak has been awarded the Golden Hockey Stick by the Czech hockey community for the fifth year in a row.

The Golden Hockey Stick is the Czech player of the year award, given by Czech hockey coaches and journalists. Originally specific to the highest Czechoslovak hockey league, it was extended to include Czech players from around the world, including players from other leagues, including the NHL and KHL.
Pasta is in rare company, joining only hockey icons Jaromir Jágr and Dominik Hašek in having won five times. Jágr won twelve times and Hašek five. Having won for the fifth straight season, Pasta passes Jágr for the most consecutive victories, (but not most total victories).

Runners up for this year’s award were Ondrej Palat and David Krejci.

We keep getting Tornado Warnings sent to our cellphones.
I had recently charged an old cellphone which I really only keep around as an occasional MP3 player, and it got the first warning. I’m sitting in a sea of 3 laptops and my current phone, and I’m trying to find out which of 90 browser tabs is suddenly making this hideous noise while I’m on a Zoom meeting

Found out last night that my brother is coming September 10th(or so, we call it Dan time) and is staying a week. I usually want to hang myself ten minutes into our phone convos, so stay tuned, eh? Shower is number one priority!!!

Morning all. My co-host introduced me to my new favorite song last night. The group is a Smiths/Misfits mashup and they have a Morrisey parody called The Show Has Been Cancelled:

One of those instances where the parody is better than the real thing!

It’s been stuck in my head since last night! Sure is a fun little ear worm!

And have you watched The Simpson’s parody yet?

Last time I checked that season wasn’t on Disney + yet. That was a while ago, though, so I must look again.

There were some old episodes on while I was at mum’s. Colonel Homer. Bart The Lover. Absolute classics!

Is that the one where Bart uses the picture of Gordie Howe to woo Mrs. Krabappel?

Looks like people are guessing Season 32 will be on there sometime in November.

We have been gifted multiple Simpsons seasons… perfect antidote when Luther gets too heavy! Remember, we grew up on Leave It To Beaver!

Started watching it when I was Bart’s age – now I’m five years older than Homer!

Definitely have to mix it up! I usually try to watch a comedy series after I’ve finished a drama series.

And speaking of Morrisey, it was just announced he’s replacing Nine Inch Nails at Riot Fest in Chicago. Consequence with the A+ tweet:

Good morning!
The dog days of hockey are here!!! Good on Pasta…this was not his best year, but a good one. Hoping this year is even better. Better yet, I have a prediction….. David Krejci will star in the ultraliga, then come lead the NHL in post season scoring, steal the golden stick back….. and win the Conn Smythe…. Yeah, it’s a dream and may require Hedman and Kucherov to decide they are on sabbatical for this years playoffs, but totally plausible…. right?
Rainy day… I’m betting no workers show today…. Jo and I will muddle through. Might be a good day to harvest elderberries. They are ripe as can be and hanging over the river…. different mission on the river today!

David Krejci will star in the ultraliga, then come lead the NHL in post season scoring

I saw Michal Handzus play in the Slovak league a few years ago – he did a similar thing to Krejci, wanted to end his career with his hometown team. He had clearly stopped following his NHL fitness regime but I’m pretty sure he won all his faceoffs!

Well that solves your shower problem! Grab the soap and head outside!

Got the Doc Brohner’s heading outside!!!