Wow, it seemed like a lot of stuff happened yesterday. The first day of camp saw the guys getting in, testing, training, and hanging out.

Also, they did some very important photo shoots with very good boys and girls. 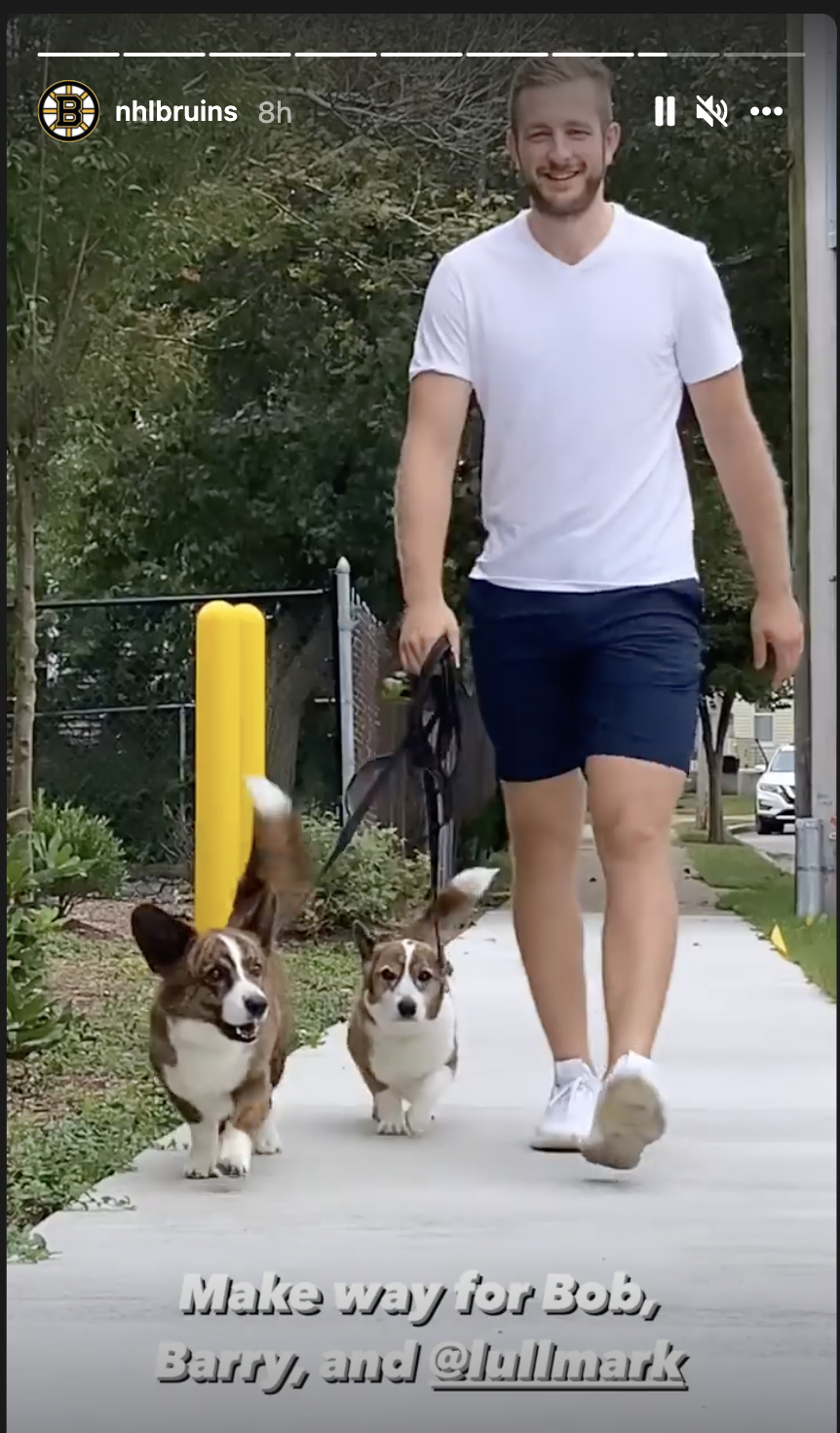 There was also media availability with Bruce Cassidy and Patrice Bergeron. Cassidy is looking beyond Bergeron and Brad Marchand for leadership in the room. He expects that Brandon Carlo, Charlie McAvoy, and Matt Grzelcyk will speak up in the room as well as Charlie Coyle. He has no doubts about Nick Foligno’s leadership ability. But he wonders if it might be time for David Pastrnak to flex a little more.

As for line combinations: Cassidy knows what he’s looking for and will see what happens in camp to determine opening lines for the season. We know he likes a blender, so everything will be based upon performance at that time.

Cassidy also said that he spoke with winger Jake DeBrusk to see how they can work to make Jake’s season better and stronger than last season. He acknowledges that Jake seemed to have issues with all the Covid protocols; it seemed that the isolation really adversely affected the younger, single players.

As for Bergy, he seems happy that the protocols are different this year so that life will be closer to normal on the road.

This season, the TD Garden has a new policy regarding admission: guests have to provide proof of vaccination or a negative Covid test prior to entry. If you’re attending a game or a show, make sure you get there early.

UPDATE: Effective September 30, TD Garden, Boston Bruins and Boston Celtics will require all guests 12 years and older to present proof of full vaccination against COVID-19 OR a qualifying negative COVID-19 test to gain access to the arena.

And finally, the Bruins preseason game broadcast schedule has been released. Apparently, no one cares about the first one against the Capitals so the schedule picks up with the next game against the Rags.

I need to update the site calendar with game schedules.

That looks a busy preseason schedule. Are the games usually that close together? I guess they must be.

Busy day – Sonia volunteered me to help at the charity she works at. Envelope stuffing. I doubt mind tasks like that and it only took a couple of hours.

TNT is one of the new broadcast partners. They’re the ones that hired Gretzky for the studio. Rumour had it that they would stream on HBO Max.

TNT is ‘Turner Network Television’, the pop & sports channel spinoff of TBS. They are owned by Warner Media, the parent of CNN & HBO. They are new to the hockey market, but have been broadcasting Major League Baseball and NBA games for many years. It should be a good partner for the NHL.

Not every player plays in every game, so games can be packed in. Star players often skip preseason road games

Morning all. Glad to hear the Bruins are fully vaxxed. (side eyeing you, Red Sox.)

There were a few exceptions around the league though. Apparently Mike Smith & Duncan Keith needed extra pressure applied to get the shot, but they did get it.
Some prospect (for the Devils, I think?) isn’t going to attend camp because he won’t get the shot. So dumb – that’s your career you’re throwing away, kid!

Zac Rinaldo uninvited to Blue Jackets camp as he is antivax

Good morning!
Good to hear hockey news! I have a friend who immediately protested the new Covid requirements… Hey, if you don’t want to vax, stay home! It’s not an unreasonable requirement.
We have real stairs! Been waiting to put the treads on so they wouldn’t get ruined. Nice to not run an obstacle course every time I go upstairs!

TBH, the thought of being indoors with a lot of people is not high on my list right now… even with vax.

I went to two games back in late May and honestly, it felt good. Fully vaxxed, didn’t get sick. Still, this team and ticket prices have made me really pick the games I want to see in person. However, I am excited to see some P-Bruins, Railers, and Pride games this season

My mom had covid despite being vaxxed and she was quite ill- although no hospital needed and she made a full recovery (ie no long Covid).

I was a bit iffy when we went to the theatre first time but soon settled and was fine. Plus I spent ten days cooped up with a covid-positive child and didnt catch it!

I think that vax requirements are great and I give zero fucks about private businesses dictating the terms regarding vaccination proof or negative tests. At this point, I have no empathy for people who can be vaxxed and won’t. For those who have valid medical issues that cannot receive the vaccine, I feel for them and we owe it to them to reduce and eliminate this virus.

I am in complete agreement with all of that

I definitely approve of the vax requirement at TD Garden. No one has a ‘god-given-right’ to watch any arbitrary sporting event they’d like in person. It’s good corporate citizenship to avoid hosting a super-spreader event. It also is good business practice to avoid potential legal liability for getting people sick by complying with current best practices.