On Friday night the Boston Bruins wrapped up their regular season against the Maple Leafs in Toronto. The Leafs iced their normal roster sans Marner, Matthews, Tavares, and Campbell. The Bruins had the regular third and fourth lines plus half the defense, the lower half. Predictably the Bruins lost. I don’t think they were trying to win, honestly.

Everything is fine because the Bruins will not face Toronto, but the Carolina Hurricanes in the first round of the Stanley Cup Playoffs!

Sure the Bruins were beat all three times in their regular season matchups by a differential of 15 goals (16-1). the last being the beatdown on Willie O’Ree night. However, a lot of changes have happened since that February night.

For one, the Bruins really found their stride after making a midseason switcheroo with the top two lines; Pasta down to the second line, Smith down to the third, and Haula promoted to 2C. By the end of February they really started to look right. Then at the trade deadline, the B’s picked up a couple of defensemen, notably Hampus Lindholm, who shores up the top pairing. If you need proof that the Bruins are much better than the last time these teams met, here you go:

Just wanna note that the Bruins are 6-0-0 when Hampus Lindholm, David Pastrnak, and Linus Ullmark are all in the lineup this season.

Looking at the matchup analysis, these two teams don’t seem radically different. The largest disparity was in penalty kill, a difference of 7 points. 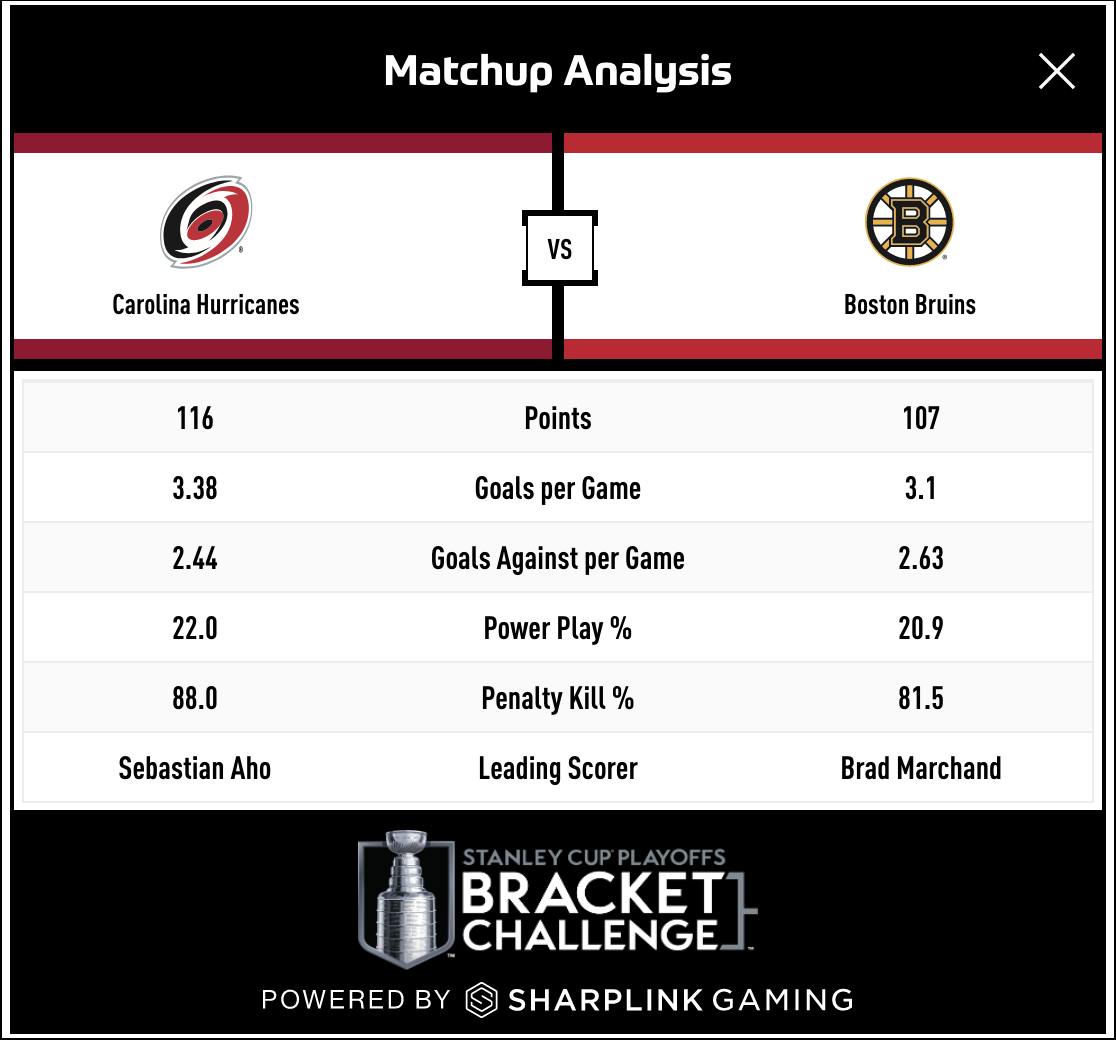 A huge question mark for the Canes is in goal. While the tandem of Frederik Andersen and Antti Raanta won the Jennings Trophy for fewest goals allowed, the effort was mostly on Andersen who played in 52 games before being sidelined with an undisclosed injury on April 5th. Since then he’s been week-to-week.

Frederik Andersen will not start game one.

Rod Brind’Amour confirms that today was another maintenance day for Martin Necas.

He also says that Frederik Andersen will NOT be the team’s Game One starter.

As for the Bruins, Bruce Cassidy is being coy about naming a round one starter but did name Ullmark the game one starter.

On Saturday, the Bruins sent Marc McLaughlin down to Providence and returned Jack Ahcan, Jack Studnicka, and Oskar Steen to the Providence Bruins. Chris Wagner, who was called up for Friday night, will remain with the Boston team as an extra forward for the foreseeable future.

Also based on what Sweeney said, it sounds like Chris Wagner will be with the NHL group for the rest of the way. Noted he’s “earned the right” to be here.

He joins Mike Reilly and Josh Brown as players in waiting.

Anton Blidh, Chris Wagner, Mike Reilly, and Josh Brown will be the extra bodies to begin the playoffs.

Tonight’s game is at 7pm on your choice of ESPN or NESN. And for our London based associate, he’ll know how to tune in for that

Morning all. Check your basements, someone in the Valley posted on Front Porch Forum that two cows got loose from their farm!

For those who didn’t see it

The reactions are priceless. pic.twitter.com/cYEOfE7bdw

Today’s the day. I was very pessimistic due to the H2H record – every year there seems to be one team the Bruins just can’t get a handle on. But didn’t realise it had been so long since the last meeting, so a lot more hopeful now!

Rather than stay up half the night to watch live I’m going to get up early and watch the full replays. Can buzz through the TV timeouts that way, and won’t be tempted to reach for the bottle if things are going badly!

It’s May Day holiday here today, though I’m working. Every May Day there’s a big motorbike ride from London down to a town on the coast, Hastings (as in The Battle of). They come past the end of our street and Leah and I have a tradition of wandering down and see how many we can count. This morning in 25 minutes we counted 430 bikes! The cafes must do a roaring trade.

It’s May Day holiday here
May Day isn’t celebrated here like it once was. Jo remembers May Day baskets that kids received Halloween style… door to door. I vaguely remember May Poles… Kids danced around them in celebration of Spring. Spring can arrive a month late here and that may be why the holiday has been mostly forgotten.

Yep, May Pole dancing very much a part of it here. Not to be confused with pole dancing!

Good morning!
Full of anticipation for the playoffs! This is not February’s Bruin team. I’m hoping we can watch!
Rested all day yesterday… plenty of sun, beautiful day… Back to work today! It doesn’t give me a lot of time to chat, but I do need time to fly until 7pm.. Go Bruins!

Looks like we have added to our avian menagerie. Some Tree Swallows have commandeered the Purple.Martin house we put up.. (gift of daughter in law, had to put it up) They are a relative of the Martins, so no biggie.
Also, bear activity is high in the hood. Neighbors moved out.. (Monrovia,.pop. 98) and a bear has been dragging the garbag left behind hither and yon. It has been picked up and put back on the curb several times now…. What’s the definition of insanity again? We do so much composting and recycling, we don’t generate a lot of trash, thank goodness.

Is the same bear that nabbed your bird feeder. Or are there multiple bears?

I think it’s the same bear, but if she had cubs…. we are in for an interesting Spring. My neighbor has a lot of trail cameras out, so I will get the news soon.