The IIHF are down to the semi-finals after weeks of round-robin and now elimination play. And some Bruins players are in the these games this weekend!

David Pastrnak joined Team Czechia shortly after his media availability right after the season was over. Young David greatly improved the team, playing alongside his idol and former teammate David Krejci.

David Pastrnak seems to have pretty good chemistry with this Krejci guy: pic.twitter.com/SL9kfPX4x9

Jeremy Swayman is the sole Bruin on the American team but he has also been crucial to their success. Like Pasta, he’s played 5 games, won 3 of them with 2 shutouts. In fact, his save percentage is a gaudy .969 after facing 97 shots and allowing only 3 goals. He’s even won the Player of the Game twice!

Also, he’s enjoyed meeting up with his teammates from back home.

Swayman, Ullmark and Pasta all being reunited together at worlds is my favourite thing ever!!! pic.twitter.com/UrHvyqZfY4

Linus Ullmark was in the competition until yesterday when Canada came from behind and eventually won in overtime.

Swayman and Pasta could face each other in the final game if their respective teams make it to the final on Sunday morning.

The games as they line up on Saturday and Sunday:

This is how the power rankings shake out for the IIHF as of last night: 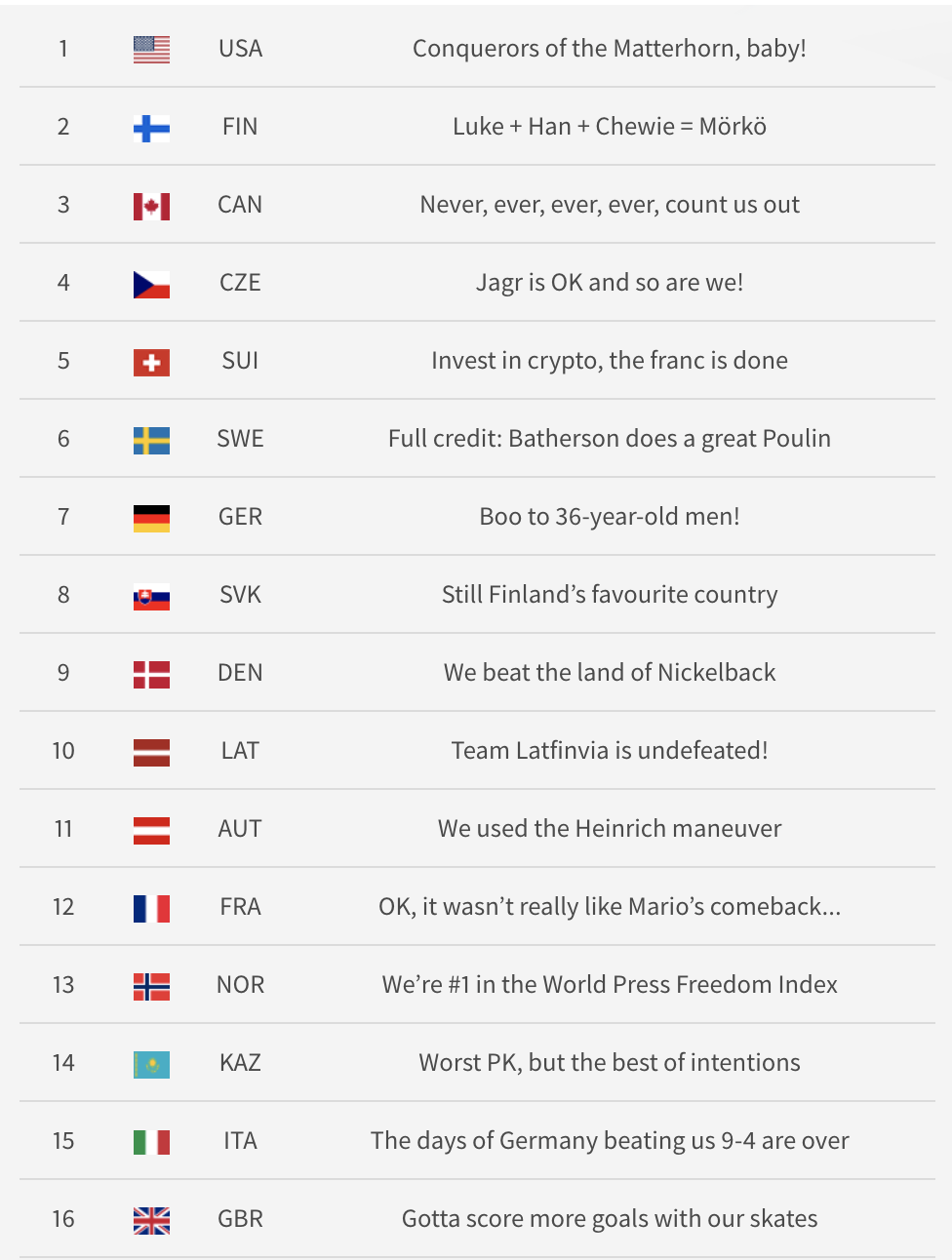 Morning all. Friday? Yes, it’s Friday. It’s been a terrible week with the recent tragedy in Texas. Be kind to yourselves and others.

It ix a time for peace, love, and reflection.

Did you see the Golden State Warriors coach’s presser. Powerful stuff. A shame absolutely nothing will change.

And last night instead of live tweeting their game, the Yankees and Tampa Bay Rays used their social media channels to post facts about gun violence.

They said on our news it was the 27th school shooting in USA in 2022. That’s more than one a week. Terrifying.

I’ll check that out.

Watched the Cze-Ger match yesterday afternoon. Very one-sided, although of the Czech’s four goals, 3 were on powerplay and the other an empty-netter.

Slovakia blew a two-goal lead over the hosts Finland, although to be fair it was the right result. US have a tough fight on their hands in the semis. The USA game was on at he same time as SVK, but the commentator obviously had one eye on that one and kept saying what a great game Swayman was having.

Went for a trip this morning, on my walk – over a rock. I was in the air long enough to think to myself what a long flight it was, but managed to land on my feet! Later on I saw an old man trip over on the pavement, and he also had a lucky landing – on the grass verge!

My head went straight to the bottom right hand corner of this! Glad your okay. Amazing what an eternity one can spend in those fateful moments!

Amazing what an eternity one can spend in those fateful moments!

I’m you’ve had a few of them on the water!

Being upside down in moving water can seem eternal… the reality of video is startling. Had a few hockey moments that still haven’t ended, as well… :-0