Today I will take a break from screaming into the void about my frustrations with Don Sweeney. Well, kinda. This post today doesn’t directly involve him but rather how he handles information. I don’t know what it says about me that I’m more annoyed at how he dispenses information, in this case with a press release last on a Friday, than with the information itself, although it should be said that this news is troubling.

We knew about Matt Grzelcyk and his dislocated shoulder but not about a surgery. Well, on Friday evening we found out that he had a stabilization surgery on his right shoulder. He needed a stabilization procedure due to the possibility of recurrence. He had an open stabilization, or Latarjet Procedure, which according to an orthopedic surgeon named Dr. Matthew Provencher who specializes in knee and shoulder injuries, involves:

Open shoulder stabilization surgery replaces depleted bone, deepens the socket (glenoid), and moves several tendons at the front of the shoulder that act like a sling, treating chronic shoulder instability, and reducing the risk of future dislocations.

Well, that’s comforting. Gryz is expected to be out for at least 5 months.

The real surprise was in the next announcements, again made after 5pm on a Friday with the Grzelcyk one. Mike Reilly had an arthroscopic ankle procedure in Wisconsin which will take 3 months to heal and rehab. He should be ready by training camp.

Okay, that one was unexpected but not really a surprise. Try this one on: Charlie McAvoy will be out until November after having an arthroscopic stabilization of his left shoulder. While his surgery was less invasive (no moving of major muscles, tendons, or deepening of the pocket; also requiring two small incisions), it was still a stabilization that will take months to recover from.

I learned about how Gryz and Chuckie had one good left and right shoulder between them by seeing this: 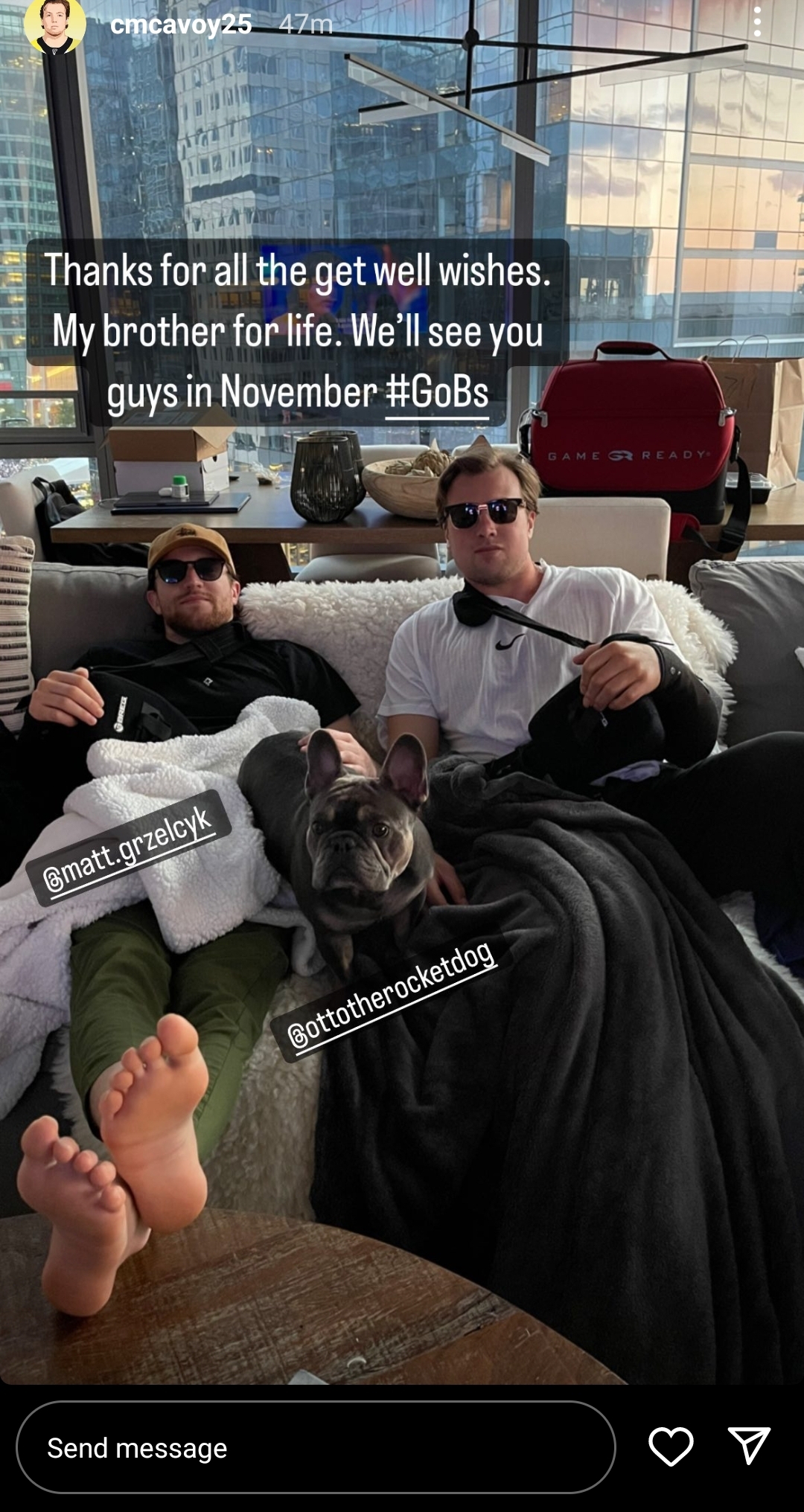 Yes, I learned via an Instagram story. Thankfully, Otto the Rocket Dog is taking good care of these besties.

Also what I learned on Insta yesterday: Gryz is getting a puppy. 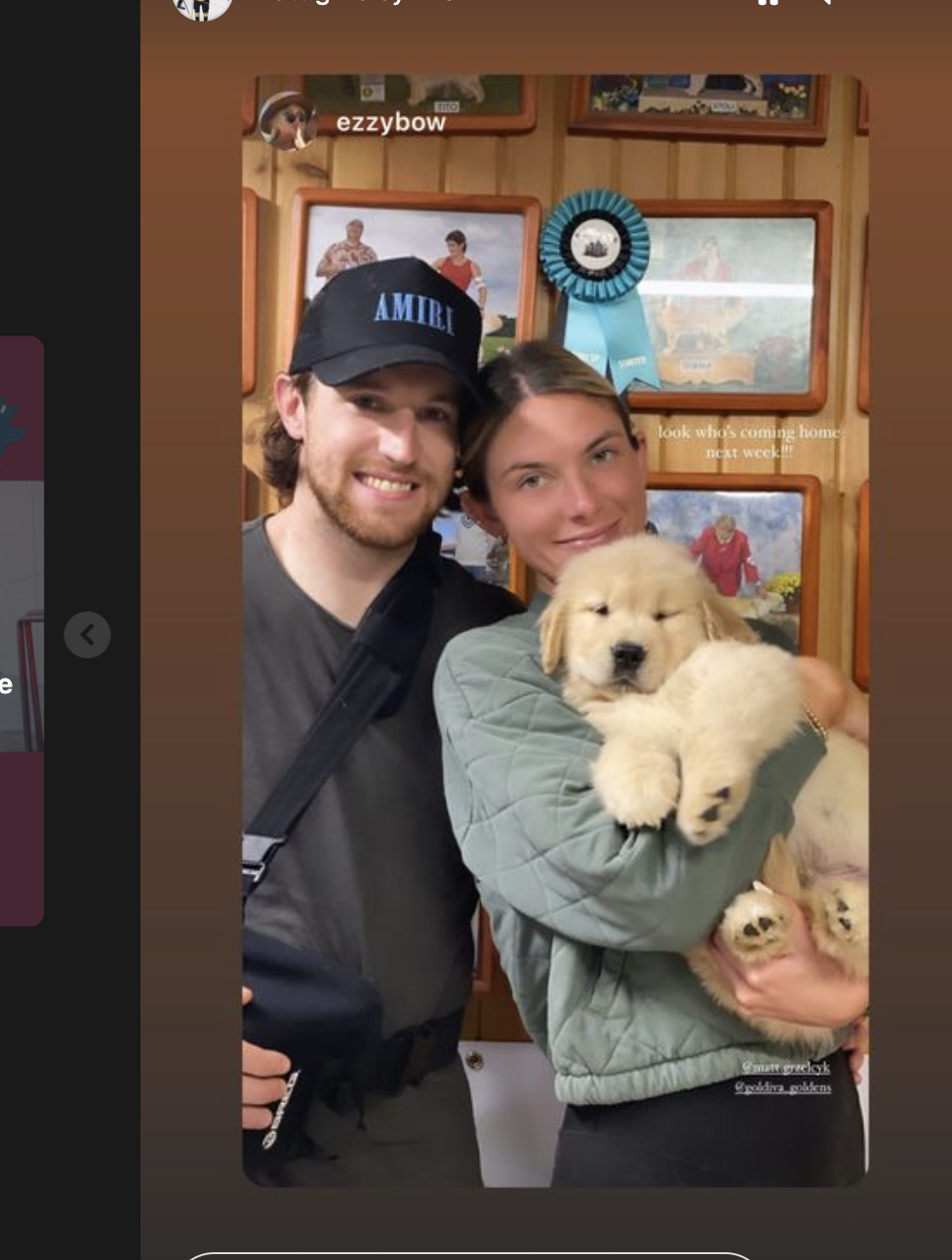 Half our defense is on the mend

Hey Sis, no show tonight! Do not go to the studio!

Thanks! I will not go to the studio! I will eat dinner and then curl up in bed!

The Bruins team next season:

^The Bruins won’t be this good next season^

Good morning,
I did hear all the injury news last week on nhl.com. Why they had that news … \_0_/
Tampa locking it down on the Rags… Game 5 is huge.
Neighbor Brian stopped by yesterday evening…. Gave me some polarized sunglasses, a roll of fly fishing line, and the biggest brook trout ever! He had tried to release it but it wasn’t going to make it. Jo and I had fresh trout filets for dinner. Spectacular!

I bet the Avs are enjoying this series! Apparently theres a scheduling clash between a potential game 7 and a Justin Bieber concert at MSG. He likes hockey. Just stage both at the same time!

Jo and I had fresh trout filets for dinner. Spectacular!

Hopefully we’ll make it to Slovakia this summer. In-laws’ neighbour has his own trout pool. Not quite river caught but a million times better than supermarket!

Pretty sure Beiber is a Leafs fan…

So he would be unfamiliar with the Eastern Conference Final

I really wish i could catch fish myself. I am the antitrout!